Posted at 16:53h in HALO Talks by David Ganulin 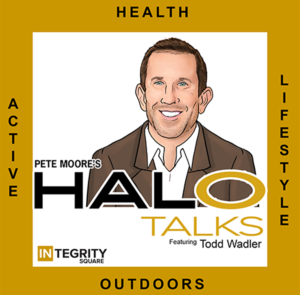 Pete Moore: This is Pete Moore on HALO TALKS NYC on location Manhattan beach, California. I have a fellow prior investment banker and now CEO of one of the largest fitness boutique operators, Todd Wadler, welcome to the HALO Talks.

Todd Wadler: Thanks Pete. Thanks for having me on.

Pete Moore: Good to see you. So you want to give your, uh, your quick personal background, just so other entrepreneurs know where they could get to, if they’re currently working on an Excel model in a investment bank, you can potentially get to this a fun hobby that we’ve turned into a business.

Todd Wadler: Yeah, so, yeah, exactly. So I started out at DLJ and investment banking and I think was an investment banker for almost 24 years. And every stop that I made along the way was a very entrepreneurial kind of endeavor. I’d say DLJ was as entrepreneurial as it got it built businesses inside of itself, and really kind of gave you an opportunity to see high growth in action and watch people manage high growth. And from there, I was at UBS, which again is a big name, but the investment bank wasn’t as developed as, as it ultimately became. And in 2007, I was part of, one of the founders of a firm called bolus and company, which is obviously now a much bigger firm with offices all around the world by an investment banking. I spent a lot of time in high-growth then sectors. So in consumer health wellness, I spent a lot of time advising companies, uh, specialty areas that had a lot of entrepreneurs.

Todd Wadler: I was always sort of drawn to that quite frankly. And when I was able to, in 2016, I developed an idea which is box union, which is an operator of fitness boxing studios in Los Angeles, California. And from there, you know, our goal was always to really grow the business. So we looked at, you know, coming from my background in investment banking, we always looked at different ideas of how could we grow it, you know, both physically digitally, um, through acquisitions, et cetera. And so, you know, really the skill set that I was developing and owning and honing in on through my investment banking career really allowed me, I think, ultimately to be able to then really thrive in becoming an entrepreneur and getting, um, and an operator of a business quite frankly, where you really need to be able to understand a lot of different things throughout the day. It’s not just the product. It could be the healthcare benefits for the company. You have to be able to understand and pick apart an income statement. And I really think that actually leads you to make better decisions when you can kind of think holistically about it.

Pete Moore: Yeah. I mean, I, I got brought up in the, in the DLJ, uh, area as well from 95 96. And I always felt like when I actually started running a business, that I actually felt what it meant to, to like change assumptions in the Excel model and actually have to physically do it. And I was like, Holy. Like, I can’t just plug in like 30%, you know, top line growth. And like, it’ll just show up. Like I gotta hire people. I gotta ramp them up. I got to buy them a laptop. I gotta train them. I mean, so from, from your standpoint, did you like fully appreciate like what I was doing in investor bank? Like when these guys were putting up numbers or these women were putting up these types of numbers, like how much it actually took to actually do it?

Todd Wadler: No. I mean, it’s a whole new appreciation for how business works, right? It was like, we might be at a couple in an Excel sheet, you got a couple of line items for revenue, like three or four expense line items. And you realize like payrolls 12 different lineup. Oh, bonuses, wait without pay bonuses. Right. And how you think about it. And, but I do think like that Excel training, you know, and I looked at the people in my company and you know, you have to have a mix of both. You gotta have your creatives and your people driven by something else that maybe aren’t totally constrained by the numbers. But then at the end of the day, it’s based in numbers. And whether you’re looking for investment, you know, whether you just need a profitable business, whatever it is you need, but you definitely learn how many inputs go into each line item up of an Excel.

Pete Moore: Yeah. So, so I got to add, everybody knows that. So I’m not going to shy away from it. I’ll just kind of assume it’s like a superpower, but you know, doing, doing investment banking, you know, you go and deal with the deal. You know, I got like 90 or 180 day sprint of gum closed them onto the next deal. I kind of like turned that into my lifestyle. So how have you either psychologically changed your point of view to say, Hey, I’m actually building a business. And to give you a quote by my prior boss, back in the day, Peter Brockway said to me, look, you know, if I build something of value when I’m done with that and I want to sell it, someone’s going to pay me for the value that I’ve created. But it’s like a singular focus versus like, Hey, I’m going to help a lot of people. And I’m like a deal guy. So talk about that psyche. Yeah.

Todd Wadler: Yeah. No, that’s a good, that’s a great question because that is the, how you get trained in investment banking. You’re just constantly moving the next to the next. The reality is in a company, honestly, it’s not that different. I mean, again, if you look at my schedule in a day, it’s like eight different deals in a day. They, the deals might not be raising money. It might not be, but it’s, you know, you’re dealing with a human resource. You’re dealing with a lease you’re dealing with, you know, where’s the next place to grow. Now I’m dealing with franchisees. You’re every, thing’s a relationship building that relationship with people. And that really is what investment banking is. Right. It’s, it’s building a relationship. It’s getting, um, analytical enough to understand what you’re talking about. Right. It’s so, yes, we’re not going deal to deal to deal, but we’re going topic to topic, to topic.