Posted at 16:29h in HALO Talks by David Ganulin 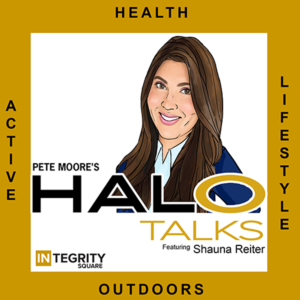 Pete Moore: This is Pete Moore on HALO Talks NYC on location, California, with my new friend, from Santa Monica entrepreneur, Shauna Reiter, Welcome to the show. Thanks for having me happy to be here. Awesome. So you are officially part of the Hilo sector through helping people feel and look better. So let’s talk about Elia and tell us about your personal frustrations that have evolved into a thriving business.

Shauna Reiter: I love that. I love that introduction, you know, it’s true. I think solving a problem is how most successful businesses are started as you and I were just discussing. And for me, the problem was one of depletion and a history of really severe auto-immune disease. I had been down some pretty scary roads in my youth that were not unfortunately resolved through the pharmaceuticals recommended by doctors. And there was a little bit of a crazy hunt for me over the course of about two years in terms of finding, resolve for both what is called a leukopenia it’s it’s neutropenia, there’s different ways of categorizing it, but, you know, I was born with a body that just doesn’t produce a normal number of white blood cells. In addition to that, I tested positive for Crohn’s disease when I was 14 and simultaneously was battling parasite.

Shauna Reiter: So there were a lot of variables with overlapping symptoms that my body was not unfortunately able to overcome naturally. And so I was seeking, you know, medical advice and the prescriptions just weren’t working. And so eventually I got off Pretnazone and NASA call and all of the Western pharmaceuticals and went down a more holistic naturalistic route. I turned to Chinese herbs a homeopathic medicine acupuncture and primarily nutrition slowing my body down, cultivating what I now understand is a meditation practice or mindfulness, but at the time, you know, whether or not it was categorized as such, I wasn’t aware of it. I was only 15, but, you know, 14 kind of transitioning to 15, but basically listening to my body and understanding the cues and recognizing that when I eat certain things, I don’t feel great the next day, or even with an hours, if I don’t sleep enough, I’m cranky and everything feels inflamed.

Shauna Reiter: You know, so I ended up on a really beautiful path ultimately in my late teens, but then after having my second child after 24 months in my thirties, I found myself once again, really to feel inspired and vibrant, alive, awake, all the things we want to wake up everyday feeling. And so I decided to once again returned to the sort of medicinal practices of my youth, which were really cultivating mindfulness around eating and nutrition and understanding that my physical needs had changed drastically. You know, since I was a teenager, I was now the mother of two children. I’d been breastfeeding consecutively, you know, for years I went from breastfeeding, one child directly into childbirth and breastfeeding my second. And I began to do intensive research into what my body required at that stage, at that point in my life, and really was pretty dissatisfied with, with the finding I was, I felt like nothing I was eating was satiating me.

Shauna Reiter: I still lacked energy. And so as any new breastfeeding mother understands, there’s really not enough to consume. Like everything is being stripped. Pounds of minerals are being stripped from your body by the baby. And you’re of course recovering from childbirth simultaneously. And so I started investigating powders protein, powders, different kinds of colleges, and didn’t feel physiologically. Like my body was transforming the way I was hoping it would or responding in, you know, in the way of feeling the kind of energy I was seeking. So my initial concept was to start a line for new mothers and for breastfeeding women. And then I decided I wouldn’t be in that stage for the rest of my life. So I wanted to create nutrition that would sustain me indefinitely. And I began my company, Elia naturals, really based on a very strong desire to not only have the energy that I required to do all the other things that I was, you know wanting to pursue in my life like music and singing and things I had done professionally in the past. But to not also slip back into a place of being unwell which had been, you know, my story in my youth when I had overlooked all of the signals and really sort of trauma trampled, you know, the signs that it was time to slow down and properly feed myself emotionally and physiologically.

Pete Moore: Got it. Well, that’s a, that’s a great summary and, and, and journey and congrats on getting to this point of not only self-awareness, but you know, self natural medication must feel good to be able to, to achieve. As you were going down that path, did you seek out besides your personal research any nutritionist or naturopathic doctors or and then as part of, did you, was there a part of you that was always like, you know, what, maybe what’s out there is in whatever’s obvious is not the answer, you know, actually I have to kind of go deeper to, to actually find it because obviously there’s products that have doctors that market, those products, how did you get to, I guess, a state of clarity to say, Hey, no, one’s trying to sell me anything. You know, or like becoming an evangelist for something that, how did that, how did, how did you kind of get to that awakening?

Shauna Reiter: I guess my starting point was one of distrust, which I suppose fueled part of my passion and really, you know, pursuing clean well-sourced ingredients that I felt, you know, I, I could trust. I think that when you have in the past experienced healing through nutrition, you understand the difference between pure quality ingredients and you know, those kind of marketing you know, companies, marketing products that are clever and strategic in the ways they are presenting, aren’t having an effect. And that’s something that took a lot of time and practice, and there are kind of two components of that for me. One is the research, which is, you know, who’s whose, whose agenda is it that I’m sort of buying into? What is their mission? What’s their purpose? What do they have to gain from this? You know, and do who are they associated with?