Posted at 18:57h in HALO Talks by David Ganulin 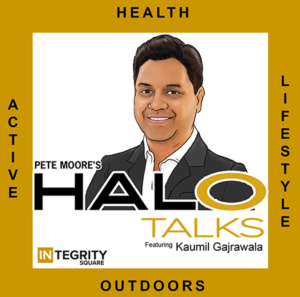 Pete Moore: This is Pete Moore on HALO Talks NYC on location Manhattan Beach, California, bringing in, in new friend of Integrity Square, Kaumil Gajrawala, head of equity research focused on consumer staples and the author of the new wellness initiative at credit Suisse. Thanks for coming on a doing today, living the dream man home here. Love it, love it. We’re doing well. We are super excited that you have brought your research skills and scope to the wellness category, which we’ve now referred to as the halo sector. So we’ll just do a quick plug health, active lifestyle outdoors. So what was the you know, give us your, your personal background and then talk about the team that you built.

Kaumil Gajrawala: Yeah, I’ve been in the, I guess I’d been in the investments business. I was one of those kind of kids that grew up always wanting to be an investor, that sort of thing. I was in the investments business though started, you know, from an intern and came out into the world, covering internet stocks, just right during the internet bubble sought a lot of new businesses, many of which expected to be incredibly, incredibly successful. And several of which were, and a lot that didn’t really work out, including myself. And I thought I’d be really, really rich working on wall street in the bubble, but I rolled in right at the end

Pete Moore: And I did something similar to that.

Kaumil Gajrawala: And so so, you know, we had to regroup a little bit. The offer came to say, Hey, you can cover beverages. I didn’t really want to do it. I thought I was a cool tech guy and eventually got into consumer, got into beverages and found it to be a lot of fun at different sort of dynamic. You’re looking at very profitable businesses that have been around for a long time, incredibly, incredibly competitive versus inventing new business models. The different sort of analysis did that for a number of years, moved through the ranks, added a global overlay. So we’re looking at beverages globally. Then we started adding household products. I then went on to being an investor for about five years at a private investment fund. We invested in, you know, what we like to think of as very high quality assets at better than fair prices.

Kaumil Gajrawala: So we would look for businesses that we thought were going to be great and we’d want to own for an incredibly long time, long periods of time that are going through a difficult moment. And we’d try to step in. And more recently kind of came to credit Swiss as a as an equity analyst. I’ll explain what, what that is in a moment. But as we’re doing that, our primary sort of goal in beverages and household personal care as I returned is effectively to help asset managers make money. So anyone who saves their saves their income with mutual funds, ETFs anywhere where your savings might be, you obviously don’t expect it to sit there. You expect it to grow. And those folks, when they’re buying companies that I may cover like a Coca-Cola or a PepsiCo will want to speak to an expert, someone who spends all of their time, just in that space.

Kaumil Gajrawala: And I’m the guy that they will among several that they will talk to to say, cause they’re obviously buying hundreds of millions or billions of dollars worth. And if they’re going to make that decision, they want to speak to someone who’s followed the beverage space for whatever it’s been 20 years, that sort of thing. As it relates to expanding into halo which has been a bit more recent, but as I kind of looked at the history of what we were observing in the consumer product space, there was a couple of things happening first, all the major companies, pretty much all of the capitals they were deploying was some version of health and wellness, whether it was discovering diet Coke and Miller light, or buying vitamin water, or obviously a series of deals more recently across across the spectrum. So you kind of know that that’s where the industry was going.

Kaumil Gajrawala: You knew this was a big thing. And, you know, we had been watching sort of the play by play for, for two decades. Then more recently we’re looking and we’re seeing that the consumer has been moving in this direction for a long time, but COVID really accelerated it, I think in a big, meaningful and permanent way at the same time, we’re thinking, well, our job is to help other people make money. Our job is to help asset managers find things to invest in it. And there’s lots of places to invest in the halo space. We might as well be the, the, the, the centerpiece for these folks, someone for them to go to that looks at the entire space. What usually happens on wall street because we don’t really evolve that quickly. We usually end up having is something like a Peloton comes out and it goes to the media analyst because that person covers Spotify and Netflix or something comes out like a Celsius and it’s covered by a beverage person, but there isn’t really anybody who just looks at wellness across all of its spectrums, looks at how halo cross all of its spectrums and says, if you want to bother to make money in this space, here’s someone you can speak to that will help understand it spends their time on.

Kaumil Gajrawala: It obviously works with folks like yourself to try to understand it as best we can across sort of the spectrum. And so we came up with this idea and narrowed down all of our work to doesn’t sound narrowed down, but narrow down our work to about a 101 page just to keep it as concise as we could.

Pete Moore: No, it was a great report. And for those listening, we’ll put it in the show notes on how to download that report, you know, as you think about these real wellness companies and halo companies that you cover in the public markets, they’re obviously trading at significant multiples which, you know, should correspond to their, you know, future potential growth. However, you know, in the halo sector, especially with Amazon and the, the internet, you know, the compare competitive barriers to entry are obviously much lower than they were when you and I started also internet companies back in the day, you know, you used to have your data center, you, you didn’t have the option of, Hey, let’s just go to Amazon web services and, you know, bam, we got a company and go to Spotify, you know, Shopify. So how do you kinda, you know, square square, the, the, the peg, if you will to say, Hey, look, these companies are going to be really big companies and they warrant these kinds of high valuations because I see where they’re going to be on the other side. And then another side might be three to five years from now.