Posted at 17:47h in HALO Talks by David Ganulin 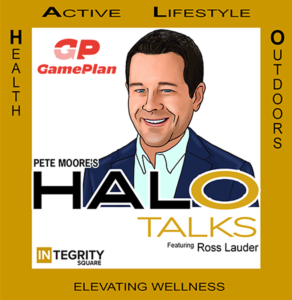 Pete Moore: This is Pete Moore on HALO Talks, NYC, I have the pleasure of welcoming back As part of our home And away podcast series over the small pond, Ross Lauder Global Tech leaders podcast, as well as the man behind single focused talent. Ross. It’s good to see you again,

Ross Lauder: Pete. Great to chat with you again.

Pete Moore: Why don’t you give your quick bio and then we’ll riff from there, buddy.

Ross Lauder: Sure. I’m a computer science guy. Did that as an undergrad. I did a postgrad in business in marketing, worked in the tech industry in Ireland’s evolving tech scene, which is pretty big reputation over the past 20 years. We’ve got the headquarters for Europe, for Google, Facebook, LinkedIn, Twitter, HubSpot Salesforce, Microsoft you name ’em they’re all here started out in hardware, worked my way through software. Went, had the good pleasure of going through an IPO with HubSpot and started and sold an agency. And now I place rock stars in that industry. I guess the advantage I have is that I’ve worked, the roles led the teams for the positions I actually place in and kind of know where they’re coming from a candidate point of view. And what we’re doing with the podcast is really to allow folks to get their message out there, to tell their unique story, to have candidates pre prepped, going into an interview, meaning that they understand what it is. The value prop is all about the us P the ethics and the values behind the org, which gives folks a leverage up and kind of gets to that fit quicker. We find by having that as an asset, that the, you know, that the org can use to, to sell themselves so to speak. So that’s what we do.

Pete Moore: That’s great. So what, what was the impetus behind you deciding after successful HubSpot and, and several other ventures that you were going to start helping other people, you know, or to people asking us, Hey, why don’t you guys just become investors and do your own deals? You know, instead of trying to find investors and I’m like, well, I want to try and help as many people as possible. And I feel comfortable in this type of role. So kind of what brought you from like operator to now, you know, executive search and, you know, really assessing talent versus jumping into another role.

Ross Lauder: I needed something to do, Pete. I, you know, there’s only so much golf you can play and there’s only so many times you can go for run around the block. No, I mean, in, in reality, I, I, I felt it was a good shift of an industry that had a lot of value to be added to it. I think there’s too many. There are too many generalists out there. They’re not adding enough value. They’re not actually getting the role in the space. You’ve got to go inches wide and miles deep in my book. And that’s really where you understand the profile of the industry and the specifics within that. And we, we tell no tell folks no all the time, because we’re not able to help them, but where we are able to help is revenue generation marketing awareness and specifically around language skills.

Ross Lauder: The exec piece really is a matter of understanding the profile of orgs folks come from where, what they’ve done, the impact they’ve had and then how they can transpose that onto other organizations. So I just didn’t feel anyone was getting that. I mean, there are a lot of recruiters out there, but there, and some of them are public. Some of them are big, but they’re too broad and I was never going to make an impact there. So I really wanted to use I my own network to add value to a bigger, to bigger pie. And quite frankly, out there, there’s an absolute war on talent. There I did a survey recently, there’s a 41% overhang on available roles being advertised relative to a, a massive, massive lack of talent out there. So it’s really about getting your message and being front to house front of mind for folks. And I think Fe you need to really reinvent yourself as well. When you look at time on the profiles and that’s part of the consultancy piece, you’ve really got to lead and steer that direction in conversation with a client because you know what they may not know at all. And if they’re open to change and, and new points of view, I think that’s an important conversation to be

Pete Moore: Had. So, so in our industry, in the, you know, the, the halo sector at large, or, you know, operators that are running multiunit clubs, there’s always been this disconnect between, Hey, I want to get the best person. But I actually don’t want to pay somebody to go and find that person for me. I think some of those barriers to understanding, you know, one, you get what you pay for two, you know a rockstar 18 and a B product is a successful company and a, a product in a, in a, in a, B or C team probably, you know, leads you to failure. Mm-Hmm <affirmative>. So how do you get the message across, you know, without maybe some middle market operators that aren’t owned by private equity funds? I think private equity and VC in general, kind of know that, Hey, look, if, if I’m going to pay a third of this person salary, or like, that’s, I got a, I probably got five times return on that investment anyway, because I got a much better employee or, or professional or executive. So how do you think through like what the price people are willing to pay and understanding that you got to pay up for someone like you and your team to actually source the best talent?

Ross Lauder: Yeah. It’s not actually a conversation. We actually have to have all that often because we lead with, we, we, we lead with profiles. So we go in and we say, is this what you’re looking for? I, I rarely have a conversation around value and return on investment and, and you know, what is that multiplier look like? So I’m fortunate in that regard, I do have folks come to me at the end of their tether, having done a search and said, look, I want to, I’ve never paid more than 15 points. And, you know, I, I try not to be facetious and, you know, say, well, Hey, how’s that working out for you? Why are we speaking? <Laugh> and that tends to work because if we can find that person for you, is it not worth, is it not worth that value component? So I’ve, I’ve been fortunate with that. We tend to lead with the fit first and foremost, quite frankly, PE people don’t read job descriptions. People sometimes don’t even know what they want. So when you can get to the bottom of that, and you can match, like, for like you’re in a strong position, people just don’t take the time and effort to do. And not in this go fish, memory, attention, spine world we live in today.

Pete Moore: Yeah. So when you and I were, I’m assuming we’re relatively the same age, you know, there used to be kind of like this, this hard and fast rule that look, you got a new job. Like you got to stay there for at least two to three years. And I think my dad had like two jobs in like, you know, 40 year here and I’ve probably have like 10. So what are some of the things that, that you look at that says, Hey, you know, this candidate looks like a great candidate, but you know, he, or she’s been in like six jobs in 10 years. Like, how do you calibrate the speed of job, change the changes in technology. And also just like, understanding like, Hey, what’s in this person’s DNA, are they looking for another job? Like the day they get this new job?

Ross Lauder: Yeah. So just let me flip this for a second. Sure. And talk to you about folks who are in jobs for 20 years, because I’ve had folks come to me, who I know relatively well, who like I’ve 20 years of account management experience, and I’m like, you’re unemployable, you know, you as well have worked for you know, the civil service, which you do respect because you’re not going to be adaptable. You don’t have a broader perspective. You’re very systems orientated. You’re two operations focused. Mm-Hmm, <affirmative>, you don’t have a breadth of experience across the industry. And then the other side of that equation is a, is a, you know, a job hopper, right? So somebody’s in a job for a couple months or, you know, even, you know, a year to, to, to, so on two years is really the cutoff. If you can hack at two years, you’re in a good spot. You do want to see a little bit more tenure than that. Throughout the course of a 10 year stent, you probably want to see four positions in that. Mm-Hmm <affirmative>. Other than that, there, there are reasons people are understanding and you’re allowed one or two boobies here are in there. We’ve all had ’em. God knows. I have. Sure.

Ross Lauder: Yeah. Are they credible? Are they do have integrity? Yeah. Have they been, have they shown me good? Have they shown good results and will full of folks back them? And bear in mind, you only ever get best references from people too.