Posted at 17:28h in HALO Talks by David Ganulin 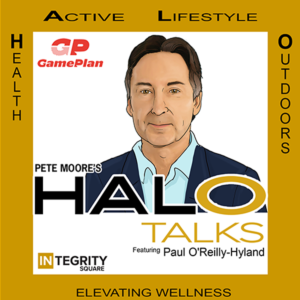 Pete Moore: This is Pete Moore wanted to officially announce the release of Time To Win Again: 52 Takeaways From Team Sports To Ensure Your Business Success. I wrote this book over the last year. I think you’re going to love it. Good to great meets Where’s Waldo, pick ’em up for your team. Time to win in 2022. Happy to come to your club, your studio, your company, and talk about ways we can optimize business and win going forward. Go HALO!

Pete Moore: This is Pete Moore on HALO Talks, NYC, I have the pleasure of bringing Paul from Zeamo who’s going to tell us about what the future looks like for employees, people that want to be fitness, enthusiasts, and anybody that wants to change their life. So, Paul, welcome to the show.

Paul O’Reilly-Hyland: Thanks Pete. Very much. And it’s great to be with you today and great to be talking about employees getting healthy and being fit up.

Pete Moore: That’s great. So you want to give your personal background here, your I would say your, your certifiable entrepreneur, like ourselves here, so you could, you know, tell us how you got into this and you know, what really got you excited about being a or the halo sector?

Paul O’Reilly-Hyland: Sure. so I, I was actually, I was in the finance sector and worked for a number of investment banks. And then I set up a hedge fund, but, you know, doing all of that, I was always on the move. And so you’re on constant road shows. And, you know, when I first came to the states in the nineties, you know, I would, the bank I was with offered me a, a gym membership, corporate gym membership, and then flash forward, you know, a few years ago, I, I realized it’s the same offering yet. There are so many different types of gyms, you know, in studios. And now with the advent of COVID the acceleration of digital, that it’s really hard for a company to offer all their employees. So a lot of companies are basically saying, well, we’re not, we know not doing it, or we just give one gym offering. So how did you make it inclusive? So I, I set off really to, to solve a problem for a company to actually say, we can actually offer it to all our employees and give them choice, but we can measure it. And then we, so we can motivate them and reward them.

Pete Moore: That’s great. So, H how’d you go about starting this off, cuz obviously there, there’s a lot of way to tackle this. You can go and raise a significant amount of money on a PowerPoint. You can say, Hey, I’m going to go in, I’m going to go and test my thesis. You’re a banker probably got really good Excel skills. Tell us how you kind of started and formulated this and then what you thought were the right steps. Cause I feel like some groups get into business and forgot what the sequence is of, of actually building a business.

Paul O’Reilly-Hyland: So for about almost a year had a couple of interns analysts at a college just trying to get the data in the industry, cuz the data in the industry, it’s a highly fragmented industry as you know, well is 30, 30, 6,000 clubs at the time in the states with not a lot of data. And so I then also started looking into the insurance angle for employers mean the second largest cost off to salaries to an employer is insurance. And so I looked at all these angles really to see how actually we could, you know, solve the solution, how we could aggregate it. Then a friend of mine the time was running 24 hour fitness Mark Smith. So rang him up and knew him for 20 years. So used quite a lot of people from the industry was introduced to Rick Caro, as you probably know, sure.

Paul O’Reilly-Hyland: Looked at the industry itself and thought, is there room for us and how can we actually solve this? So the first sort of year was really trying to actually look at it. I didn’t go out and do a big PowerPoint and raise a lot of money. I did it more of an out then actually, how can we actually build a platform and sort of test it now you can’t go to a company and say, I’ve got a hundred gyms or 50 gyms. I wanted to actually get to a number. And I wanted to go to a company which actually had employees scattered around the country. So once we got to a thousand clubs on our platform actually started to test the thesis out. So went to somebody like Morgan to McKinsey, they thought this is a great idea. And then basically put a a program in place in the end of 2018, early 19 and then started to build it up.

Paul O’Reilly-Hyland: Again, not by raising a lot of capital initially and got to the stage where we at 2000 clubs. It was kind of interesting because platforms like us weren’t necessarily popular because people were always worried, particularly coming from the studio side of things pictured very much as are you a discounter and we’re not a discounter. We’re actually out there to solve a problem for an employer. And we’re out there to actually try and get clubs to get more usage by ENCO by employees. So the initial pushback by the club industry was you guys are discounters. You’re going to get; you’re going to cut us out of this. So it wasn’t that easy to do. And then COVID came along and we then saw the same with that. Again, a tremendous amount of fragmentation with all the digital coming out, didn’t want to go and build our own capabilities.

Paul O’Reilly-Hyland: Just thought what actually what we’ll do is we’ll keep this in our platform where we can give people choice. So we’ve got about 75 brands on at home on demand about 3000 workouts. You know, everything from bla mills to Excel, to you, name it, a lot of them coming through. And again, if you, if you went to an airport 20 years ago and you went in there, you get airport food today, people want brands and they want choice. And it, and it’s no, no, no, not dissimilar with an employee. You got to give them choice.

Pete Moore: Yeah. How do you respond to some of the health club operators or boutique operators that say look, I don’t want anybody else selling my, you know, I I’ve got a relationship directly with a member. If, if that person is an employee at JP Morgan or Goldman Sachs or pick a company or Salesforce, I’m going to get them anyway. You know? And, and how have you convinced that that is shortsighted and that, you know, this is additive to your business as well as this is coming and, and, and you better get on board with it.

Paul O’Reilly-Hyland: It’s a great, the pre COVID, the corporate wellness was, was growing at 7% estimated to reach a hundred billion by 2028. So the numbers were really beginning COVID came along and it’s just, if anything, you know, the numbers, 78% of people who were hospitalized at COVID were obese. So as your employer, you’re thinking, well, we’re going to have to allocate more money subsidize. How do you subsidize all your employees? When some of them are actually members of one club, somebody who’s doing a Peloton, somebody who’s doing it, how do you do it? It’s almost impossible. Right? So that’s, first of all, we do, we make it easy for a sub for a company to subsidize. So if you’re a club for instance, and you are saying, well, I’m going to hold out and I just have that relationship. We’re, we’re basically saying we’re just going to make it easier for you even to process it, see us more as a processor to, to get your members in.

Paul O’Reilly-Hyland: So unlike some other platforms, we, we pay the clubs, not only just on usage, but we’re actually going to we’re, we’re actually allow we’re employees to actually join that club. The only thing we ask for is the data. And unlike other platforms, we reward employees. Every time they go to the gym we, we have challenges. So again, it’s getting the, the employees to, you know, to be active, we’ve integrated with Fitbit garment, apple watch. So, so right across the board, we can run challenges and reward employees, no matter what they do, whether they go to the germ, whether they do an out home video class, whether they go for running the park, that’s very helpful for an employer.

Pete Moore: That’s great. So let, let’s talk about the employer for a minute, because when I was tinkering around with corporate wellness and these types of benefit programs, you know, 20 years ago, you know, they would say, oh, talk to the CFO. Like the CFO is the one who’s like cutting the checks. And it’s like, Hey, talk to the head of HR because they’re the one like responsible for the benefits or like talk to this person. Who’s like the chief people officer or something, what’s the channel right now. Who’s making the decisions. And what kind of data do you need to provide for them to understand that there’s a good return on investment?

Paul O’Reilly-Hyland: You know, it’s not easy. Pete, and, you know, for your truth, it is and it’s, it’s, it’s easier than it was, but it’s still a challenge. And so, you know, your, your comments on saying that, you know with COVID people are actually putting more money in, if you think of our channel is still HR. And if you think what HR has been going through over the last 18 months, right. You know, first of all, they have to furlough, then they have to lay off. Then they have to bring the back. Then they, then they have to decide whether they’re a mask, who’s going to be back. If who’s going to be back a nightmare. What each one though has been saying, and each company is, are saying, they’re going to have to allocate more money. So as we, as, as COVID dissipates, we’re going to see more money coming in.