Posted at 17:20h in HALO Talks by David Ganulin 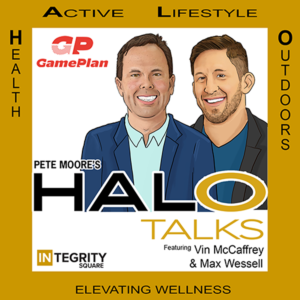 Pete Moore: This is Pete Moore wanted to officially announce the release of Time To Win Again: 52 Takeaways From Team Sports To Ensure Your Business Success. I wrote this book over the last year. I think you’re going to love it. Good to great meets wears Waldo pick ’em up for your team. Time to win in 2022. Happy to come to your club, your studio, your company, and talk about ways we can optimize business and win going forward. Go halo.

Pete Moore: This is Pete on HALO Talks, NYC. I have the pleasure of announcing the merger of the athlete book into game plan. We are bringing athletes into the halo sector and that starts now. So I have the pleasure of having max van and Ryan game plan, top executives to share with us the vision here and how this all transpired. So Ben, let me turn it over to you.

Vin McCaffrey: Yeah. Thanks Pete. So game plan founded 14 years ago, with the idea of helping an athlete get a job. What we realized though, is it’s, it becomes this chicken, right dilemma. You have to have the athletes to get the jobs. You have to have the jobs to get the athletes. What we quickly realized was that if we solve to help the athlete go through their journey, there’s a real value. So now game plan across the country is in over 300 athletic departments scaling really rapidly, over a hundred thousand athletes averaging 14, 1500 e-learning courses a day, and our platform and the engagement model is shifted from as opposed to just solving for this trans action challenge of let’s help an athlete, get a job, let’s help an athlete move through their entire journey on experiencing campus. So 300 athletic departments, the NBA, the NFL major league baseball, the NHL, you name it from a competitive standpoint game plan is working with that athlete where we think this thing is just a wonderful marriage, is we’re. We’ve never lost focus of the idea of helping an athlete get a job, but we realized we needed to work with them through the journey. 14 years later, we finally had a place where we can do that. And so now when the athlete book comes together, it now it takes us to the next step of all these athletes preparing them through their experiences on campus. Ultimately, we’re going to make the transition to the workforce, what better place than the halo sector for an athlete to land.

Pete Moore: That’s great. So, so max, as you were kind of canvassing the landscape of, you know, add on acquisitions and you know, how to kind of get to this last mile, if you will connecting the athletes directly with employers, you know, how did athlete book get on your radar screen and, you know, partnering up with Ryan here and us to make this happen?

Max Wessell: Absolutely. Yeah. So, so since game plan and the next athlete came together, which was in February of 2021, we have been pursuing growth aggressively, both in the athletic organization space, but also has been set in this kind of employer slash jobs for student athlete space. We began looking at the competitive market and looking at companies who had a similar offering and being that it’s a very niche market, you know, there’s, there’s not too many, but what really stood out about athlete book was Ryan himself and kind of how Ryan positioned the mission for athlete book and how he spoke about helping student athletes get job. You know, we saw Ryan speak on TEDx. There was a lot of things that really stood out about the athlete book, but also Ryan as an visual, which led us to reach out to Ryan about a potential merger slash acquisition.

Max Wessell: I would say if I, if I had to break it down to, to one key point though, it was that we are mission aligned in that we are trying to improve the student athlete experience. And part of that means helping a student athlete have better outcome after college and getting a job where they are valued for being a student athlete, cuz being a student athlete at spin, Ryan and I know is not easy. It takes a lot of work and dedication and to have an employer who understands how, how hard that is and values you for the skills attributes you, you acquired being a student athlete was probably most important thing. Now we also were really trying to figure out a way and, and Ryan will touch on this more, but to, to expand our presence in the virtual career event space for student athletes, the athlete book was kind of the market leader in that area. So that’s kind of what led us to first reaching out to Ryan about a potential acquisition and the rest is history.

Pete Moore: Yeah, so we got involved and met Ryan, I think the same week I was on a jet blue flight and they had the college athlete documentary available that LeBron and his agent had put together. And it, it chronicled several awesome college athlete leads that, you know, were living in their car, opening up a Dick’s morning goods in the morning being an assistant, you know, a substitute teacher, an assistant football coach. And we’re also trying to prepare themselves to get back into one of the big leagues. And I just thought that that was completely unacceptable, that that, you know, could have been working at a Jersey strong. He went to Rutgers, he was an all American less graves. And or he could have been working at a, you know, orange theory as an instructor making, you know, three to five grand a month not having to live in his car.

Pete Moore: And I’m assuming he just didn’t know that those, those options were available. And when we met Ryan, you know, the, the know bringing athletes into the halo sector also kind of struck a chord for us because several of our clients were putting ads up on LinkedIn or indeed, and having to shuffle through resumes to get employees, you know, not knowing what those people actually, you know, look like. And do they look the part of a, you know, of what they should be because obviously walking into an orange theory you know, I want to see someone who is an athlete because, you know, I want to be an athlete again. You, so there’s something aspirational or inspirational about having, you know, team concepts and, and, and actual people that played division 1, 2, 3 sports, you know, as a natural progression for them to get into the health and fitness and, and halo sector.

Pete Moore: So, you know, Ryan, you, you convinced us, you know, back in the day where this was going and you know, why athletes, and I think it’s really kind of come together where everyone understands now the benefit. But why don’t you kind of recap that for the listeners here on why they should be thinking about athletes, you know, as their entry level or, you know, even professional athletes that, you know, maybe have retired, you know, focusing on what VI said about all the leads, you know, what do you do after you play in the NHL or major league baseball, like what’s your next step? And hopefully it’s, you know, it’s the ALO sector,

Ryan Drummond: Right? No, you know, I still get so excited when somebody asks, well, why are athletes better than any other candidate? Why is that a subgroup that we should be looking at? And, you know, for any college athlete that’s gone through, it’s like, oh, it’s a no brainer. Like I had to get up every morning early and for four years and pushing through these barriers. But you know, when employers are being surveyed through the national association of college of employers, over 80% of them are saying the number one trait they want is a for the ability to work in a team. Okay. And so that just defines what, what the athlete is and what that candidate subgroup is. The challenge though has always been, is here, you’ve got this price candidate pool that is so hard to get in front of. And that was always the problem that we were trying to solve.

Ryan Drummond: How do we make it easier? And it does, does it lend itself nicely to, you know, a, a transactional job board approach. It really is building the relationships with the right employers who see the benefit of, of building a long term pipeline strategy to, to bring in athletes into the organization. And so, you know, when I’m look, when I looked at this transaction, or before we did the acquisition, the athlete book was a small team. And now it’s like we found our people with game plan, a larger team, more people that are have their own individual roles of making it possible for these employers, these employer brands to say, I’m going to lay down this pipeline. I’m going to access this talent pool of game plans, 300 plus athletic departments, 80,000 athletes that not only are just sitting in some database, no, they actively have to and are required by their athletic department institutions to take the upskill education that’s in the platform that they’re playing for.

Ryan Drummond: Well, that presents an incredible opportunity for an employer brand to say, Hey, are you interested in working in health, maybe active lifestyle life, a lifestyle outdoor industry, if yes, Hey, lemme talk to you about this. No, you want to go into equity research. Well, we’ve got this. So the point is now is like, it’s such an exciting time that we have this elevated platform with game plan to really come together and, and work with the corporate partners to say, Hey, here’s a, here’s an awesome opportunity to really stand out and not be so reactive and transactional in, in what the market’s dictating on your hiring needs. We’ve got something where you could kind of dial it back and forward and, and, and really bring these, these athletes in every year. There’s a new group, a new crop coming in.