Posted at 17:02h in HALO Talks by David Ganulin 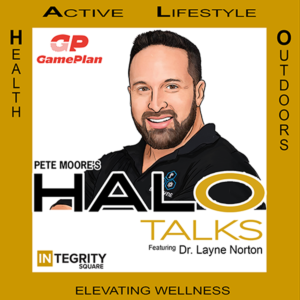 Pete Moore: This is Pete Moore wanted to officially announce the release of Time To Win Again: 52 Takeaways From Team Sports To Ensure Your Business Success. I wrote this book over the last year. I think you’re going to love it. Good to great meets wears Waldo pick ’em up for your team. Time to win in 2022. Happy to come to your club, your studio, your company, and talk about ways we can optimize business and win going forward. Go halo. This is Pete Moore on halo talks, NYC, have the pleasure coming in from Tampa natural pro body builder power lifter, and a man who is the Mossad of nutritional sciences. Dr. Lane Norton. Good to have you on the show, buddy.

Dr. Layne Norton: Thanks for having me. I, I appreciate it. Very honored.

Pete Moore: Awesome. So, you know, you’ve kind of dedicated your entire life to basically calling bullshit on a lot of different modalities science food, what is in your body. So you want to give our listeners who don’t know you, just a little bit of background on how you got to here and you know, how you became an evangelist for good.

Dr. Layne Norton: Yeah, I’ll try to give the quick couple minutes feel. So I describe myself as a meathead who loves science or a geek who lifts heavy things, 6 0 1 half dozen. The other, whichever you prefer. I got into lifting weights when I was a teenager because I wanted to stop getting bullied and I wanted to get attention from girls lifting weights, didn’t help with either of those things, but I developed a passion for, for lifting weights. And then when I got to college, I’d always known that I wanted to do something in the sciences, and I originally wanted to be a Marine scientist, but the more I got into bodybuilding, the more I just was very taken with the human body. And so I switched my major to biochemistry competed in my first body building show at age 19 was hooked.

Dr. Layne Norton: And then when I was about to graduate my bachelors, I realized I have no idea what I want to do with my life. And I don’t feel like a professional. So I’m going to delay the real world for a few more years and go to grad school. And I was fortunate enough to really, I didn’t put a, a I’ll, I’ll be honest. I didn’t do like this huge search. I just got kind of lucky that I found an amazing advisor at a really great university. So I went to university of Illinois for my PhD permanently in the top five for nutritional sciences and grad school. And then the guy I was with Dr. Don layman his specialty as protein metabolism. So I learned a ton about protein. Did several research studies published those studies. And then during that time earned into ProCard natural body building got the powerlifting turned out.

Dr. Layne Norton: I was actually better at powerlifting than I probably was at bodybuilding. In 2014 and 15, I was the USA national champion in the 93 kilogram class. And then I actually set a world squat record 2015 IPF worlds. And that was all drug tested. And during that time as I was in grad school I was writing con before people knew what, before content had a word. So I started writing for bodybuilding.com back in 2002. Did that for well over a decade, had a video series with them, just was doing stuff cause I loved doing it, but was building a following and didn’t even really know what I was going to do with it. That was

Pete Moore: Before there was an influencer tag, right? Or,

Dr. Layne Norton: Yeah. Yeah. I mean, I just, I was posting, I made I, I want to say conservatively a hundred thousand posts on various bodybuilding message boards over 10 year period. So I always say now is like, if you’re, when you’re, when you’re paying, you know, when you pay somebody something they can do in 30 minutes, you’re not paying ’em for the 30 minutes. You’re paying ’em for the 10 years. It took ’em to get there. Yes. So I started a coaching company in 2005. Well, I started coaching in 2005. I didn’t start a company until 2007 where I was just doing, you know, one-on-one online nutrition coaching because I was getting so many inquiries from people who read my articles. And I just kind of started that to get some extra pocket change during grad. And by the time I left grad school, that was a, a six figure business and was really in demand.

Dr. Layne Norton: And then, you know, once you get to a certain point where you’re so in demand you start thinking about scaling. And fortunately I met my wife, who’s right behind me. You can’t see her, but Holly and she’s like, you know, you really are out train a, a team of people to like do some of this stuff. So we trained a, we trained a team of coaches. We have our app as David alluded to before we started that’s our automated version of things. We have a subscription website and I’m also working. We’re also working on a few other projects as well, so awesome. We have, we have books, we, we do everything in the fitness.

Pete Moore: That’s great. So, you know, go, going back to your, you know, when you’re getting your, your PhD, how did nutrition get so complicated?

Dr. Layne Norton: You know, I don’t really think that the, the big messaging doesn’t need to be complicated. The, the problem is you’re in an industry now where there’s hundreds of thousands, if that millions of voices that are not just vying for your attention, but for your dollars. Right. And how can somebody stand out in that? Well, if you’re, you know, somebody who’s evidence based and you’re an actual expert, who’s been through the ringer of grad school, you use words like likely, maybe possibly, you know and, and you sound very unsure and typically people who also go through that, don’t always have the, the, they’re not usually good on camera, right? They’re not, they’re not they’re not charismatic that that’s usually a kind of competing skill sets. So I think one benefit I had was from writing content early and being on camera early, I got good at that, or as good as I can be.

Dr. Layne Norton: And I was able to kind of, I, I consider myself a science communicator. So I’m able to take complex topics and relate them to somebody’s they feel, so it feels a little bit easier to understand, but I think what happens is when people Wade out into this pool of, you know, huge amounts of influencers, they kind of go, well, how can I get heard? Well, if you’re doing it the right way, you know, it’s going to take time. And people don’t, people are very impatient. And so they start just making, you know, very bold claims because they see that that’s what gets attention. And I think that this is a big reason why there’s a lot of confusion because you have, you know, extreme claims on all different spectrums, whether it’s Cheeto, carnivore, plant based, you know, you intermittent fasting, you name it where somebody sitting out here saying, Hey, you know, there’s actually validity to a lot of these approaches, but they probably work because they restrict energy intake and whatnot.

Dr. Layne Norton: I mean, that’s not sexy enough. We, we can’t have that, you know, so, right, right, right. I think that’s a big portion of it. And I think the other big portion is people don’t understand that there’s a hierarchy to of data, right? So people, if they hear a study gets, they, they give it the same weight as any other study they hear, which is why people are so confused. And what I have to tell people is no, there, there is weight to studies, right? So a, a, a great example. I just did a post about artificial sweeteners. A lot of people are very, I saw that. Yeah. A very anti artificial sweetener. And you know, they they’ll say, well, did you see this study? And of course it’s in, you know, mice or it’s in a Petri dish or whatnot. And Hey, like my full disclosure, my PhD research was in ROEs.

Dr. Layne Norton: And like, there’s a lot of great things that you can do with the RO model. But if it doesn’t get validated in humans, it doesn’t really matter. It’s a great as a proof of concept. But what I’ll always say to people is like, what do you, what do you care about? Do you care about a mechanism? Or do you care about the actual outcoming humans? Right. So for example people say, well, look, if you put it in a Petri dish and a high dose, it does this to this specific gut bacteria. Okay, great. Well, what happens when we feed it to humans? Do we see their gut micro Flo change? And the answer so far really is no, we don’t really see that. Another great example is people say, well, on a ketogenic diet, look, it increases your fat oxidation, which means you’re going to lose more body fat.

Dr. Layne Norton: Okay. Well, do you care about burning more fat or do you care about the loss of body fat, which are two different things? Okay. That’s fat oxidation, a mechanism of body fat is a phenotype outcome. So when we, when we actually look at the human data, what it says is that when you equate calories and protein, you don’t see differences in losses of body fat, despite differences in fat oxidation. And I, I could explain mechanistically why that is, but it’s probably beyond the scope, but the point is, do you care about the actual thing that you should care about or do you care about all this other little nuanced stuff, right. Yeah. And I think people get confused with the details and they major in the minors rather than, you know, the big buckets. I mean, I always like to relate it to finances, right. What do you need to do to save money? You need to earn more than you spend. I mean, you can break it down however way you want. You can talk about crypto and FTS and, and interest rates and like all this kind stuff. But at the end of the day, really, that is the, that’s the big buckets right now. There’s a, a lot of different ways to get there, but that is the rule. And so I think, you know, people get confused with the nuances of things.