Posted at 16:15h in HALO Talks by David Ganulin 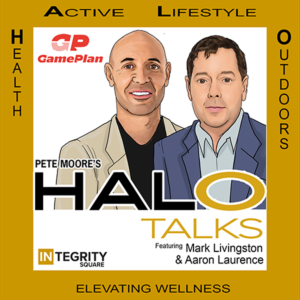 Pete Moore: This is Pete Moore wanted to officially announce the release of Time To Win Again: 52 Takeaways From Team Sports To Ensure Your Business Success. I wrote this book over the last year. I think you’re going to love it. Good to great meets wears Waldo pick ’em up for your team. Time to win in 2022. Happy to come to your club, your studio, your company, and talk about ways we can optimize business and win going forward. Go halo.

Pete Moore: This is Pete Moore on HALO Talks. I, the pleasure of bringing on my international friends from Y bell Aaron Lawrence by way of Sydney and Mark Livingston, a stone’s throw where I like to say a beat, more football throw away from Manhattan beach from Beverly Hills gentlemen. Welcome to halo talks.

Pete Moore: You guys been in the industry for a while, kind of like ourselves, you know, we’ll call ourselves veterans, you know, mark, I know you and gal and go back to throwing kettlebells around walk around the street with either really good shoulders or a lot of bad scoliosis. So take us back to how you started and how you linked up with Aaron.

Mark Livingston: So, so, you know, my backgrounds in, in advertising and marketing and my family was an advertising family. I sold media, got into the sports and entertainment sector and sponsorship sector over the years. And at a certain point an old boss said, Hey, you got to check out this, this product looked at that. And that was my entry into the fitness industry and fast forward, about 15 or so years later connected with Aaron and, and his team at Y bell fitness. And the product just caught me you know, I’ve, I’ve been around great fitness product, but this one was, it was something totally different. And, and it was, it was fun. And, you know, so we began together back in mid-February of 2020 in the us. And there’s a whole series of stories beyond that, but we’ll let you talk some,

Pete Moore: We’ll pull some out of you. So, so Aaron talk about the Genesis of the product and you know, how you turned your passion into a full-time profession, as we like to say.

Aaron Laurence: Yeah, look I’m a, I’ve been training for around 15 years now, before that I was a builder’s labor, just, you know, knocking away there living week to week and, and sort of not, you know, enjoying the work, but not realizing that, you know, eventually the damage had done to my body. I had to get out of that sort of industry and I, I sort of fell into training. It was the only other thing I knew I’d always kept reasonably fit and played sport. And so I thought I’d, you know, I was thinking the ripe old age of ripe young age of 35 or something. I, I, I went to TAFE to college and spent a year learning how to become a, a trainer, a personal trainer. From there, I sort of went straight into doing group training sessions down on Bondi beach here in Sydney, which is one of the most famous beaches in Australia.

Aaron Laurence: Very busy, a lot of competition in terms of other group trainers and, and groups all outdoors. And yeah, I just, I, I found my calling. I think I really enjoyed it. I loved it and was growing my training groups quite quickly and soon realized that the, the one challenge, the main challenge I was facing was around the equipment I was using. I loved, I loved the early mornings and I loved dealing with all the people and, you know, getting to, to, to share with them what, what I do in terms of movement and fitness, but, you know, setting up a whole lot of equipment for 30 or 40 people every morning and getting it down to the beach. And that was, was the one challenge that I, I sort of had to think about and, and came up with a, with a way around that.

Aaron Laurence: And that was using one piece of equipment to train everyone as opposed to dumbbells kettlebells, med balls, even barbells, and trying to throw all that in together in a session where I only had them for 45 minutes. So I didn’t want to spend time, you know, having different groups, doing different things and all that set up and all the instructional time that it takes to go through all that. So had a bit of a think and took a while I was drawing pictures and sketching and dreaming and, and, and really came to me just out of the blue. I think about three o’clock in the morning when one night and got up. And I, I, I sort of, I had the vision of this, this weight that sort of had multiple handles and I could use it as a dumbbell and a Kittle bell and bought everything I was already doing.

Aaron Laurence: And we sort of, it, it grew from there. I started, I got an old prototype made up. It was a very old Barbar looking steel one just from an engineer, but it worked, you know, straight away. I knew, I knew it worked even better than I thought it would. The weight distribution shifted every time I, I held a different handle, which, which really made it feel like a Kittle bell and, and a dumbbell and a me bull, depending on the, the handles I was holding it with. So that’s where it, we grew from there. And yeah, With the,

Pete Moore: It’s kind of interesting. And just to stop you for a second, cuz we, we talk about this on a lot of podcasts, but we believe in and through years and years of looking at companies, the best products or the best services are built off of a personal frustration that is that somebody tries to solve and once they solve it and go to the level of the sketches and late nights and you know, it probably should be like an alarm, like at 3:00 AM everyone just get up for 10 minutes and like come up with your best idea of writing down and go back to that’s how halo came about as well. It’s like 3:00 AM. I woke up with that and wrote down and went back to sleep. So you know it, but, but for someone to understand, you know, and there’s a lot of copycats that are coming on saying, Hey, I’m going to be the next time I’m going to be the next YBell.

Pete Moore: And I’m going to be the next, you know, TRX. And the reality is you’re not because don’t, you didn’t solve a frustration. You you’re trying to piggyback off of somebody else’s special sauce and you don’t really even understand the special sauce cuz you don’t know what the DNA was of how it started. Right. So from a standpoint of, you know, mark, you’ve been around a lot of companies on an early stage, whether it’s mad dog or whether it’s, you know, kind of like the first inning of, you know, the kettle bell movement or what have you. So, you know, obviously you probably have a very defined lens. I would say over time of like, Hey look, I see, I see this happening. Or like, this is something that reminds me of something that didn’t work before. So how does you, how is your brain kind of calibrated over time? Cause mad dog was somewhat of a, you know, a taste maker and distributor of people’s ideas. So maybe talk through that and how that’s kind of framed you.

Mark Livingston: Yeah. I mean, mad dog was a really interesting experience for me in, in, in what you said, it, it gave us exposure to a lot of different types of products. You know, their CEO had a lot of people coming to him because you know, he, and Johnny G created the first spinner back, you know, and they did it in their garage similar to Aaron. They, they, they had this knee that they wanted to address or fulfill and, and they learned the business. You know, I think it’s similar to what, you know, the TRX game did, what Randy at, at TRX did is it was, it was a need and they addressed it and it became a, I think a, you know, if I re remember the folklore, right. You know, it became a, a B school thesis or plan yeah. B

Mark Livingston: Yep. And, and from there you know, when, when I looked at this product and you know, what really stuck out was its multi-functionality, and, and it wasn’t just, the guys had thrown something together and said, oh, it’s, it’s another dumbbell with, with stuff on it. It, it had balance it and, and it had all these things, these sort of check marks that, that I’d learned from the gangs of the world and the kettlebell guys or, or other people, people in the functional space where they each had their individual products that, that made sense for the right reasons. Because they had the right focus and what Aaron and the team did is they blended that. And then what, what they had really started to do was build the initial framework for a, a distributor base around the world. And, and we’ve really, as, you know, as we’ve grown, the team, been able to write the right communications plans and, and, and really you know, get out there and talk to our customers in a way where we’re listening to them and, and frankly making changes based on those conversations.

Mark Livingston: So, and that’s really part of what makes YBell so unique and fun is, is it’s, it’s been collaborative of the past couple of years,

Pete Moore: You know, Aaron, one thing that you said kind of struck a chord with me. So if you could just visualize this. So I’m working out in, in Manhattan beach at, at Bruce’s beach mark. And my trainer comes up in his silver Honda accord and takes like 10 minutes and basically unloads his trunk of all of his equipment, then sets it up on the basketball court. So like we’re already starting out our relationship together with like a frustration, a set up, you know, me being a little anxious, Hey man, do you want me to help you? You know, so I got like this awkward relationship being built all because the equipment choice and the up, and, and in some of our halo academies and some of the things that we’ve gone through, like Southwest airlines to bring up a completely different industry. Like by the time they, they come to a gate, by the time they leave the gate, on average, when we’re in business school is like 17 minutes when every other airline is like 40.