Posted at 17:46h in HALO Talks by David Ganulin 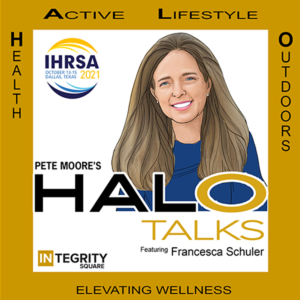 This is your host, Pete Moore. And I am pleased and humbled to announce the launch of my one and only book, Time To Win Again: 52 Takeaways From Playing And Watching Team Sports To Ensure Your Business Success.

Pete Moore: Those have, you know, me personally, and anyone who listens to halo talks or any length of time, know that I am an avid sports fan and a big believer in the value of team sports. What I’ve seen over the past 25 years, helping businesses grow raising capital, being an entrepreneur, myself, and coaching and mentoring executives in it’s. The lessons learned on the field perfectly apply to business entrepreneurs, executives, managers, you name it. Every company that’s a strong company has got a good team. It’s a quick read. There’s also illustrations in there from our good friend, mark cruelty free cartoon. If you go to integritysq.com, enter your email address and we will send you information on the book and the entrepreneurs’ survival kit as well. Be great. Take names go halo.

Pete Moore: This is Pete Moore on halo talks NYC on location, Dallas, Texas, with my good friend, Francesca Schuller, president California Fitness Alliance. Welcome back to the show.

Francesca Schuler: Thanks Pete. Great to be here.

Francesca Schuler: And actually great to see you in person.

Francesca Schuler: Great. Well, I joined the fitness industry about six years ago, so I’m relatively new to it, but was most recently a CEO in-shape health clubs, which is a large California multiunit club company. But really have also dedicated the last kind of 18 months, almost more than that now. In addition to trying to navigate a company through the pandemic to trying to create a unified voice for fitness, California. So last April when we shut down, well, we shut down in March Randy Carr, who’s the CEO of California family fitness. And I reached out to some other operators that we didn’t even know necessarily personally, but said, we got a band together and take action because we’re going to get completely forgotten California. So that was my other job the last 18 months. And now I’m focusing on it a little more full time for the short term.

Pete Moore: Yeah. So I mean, the irony is, you know, California, probably one of the healthiest states in, in, in the country and probably the biggest population of fitness enthusiasts basically have not had a voice or, you know, really used their votes or dollars to make their businesses that they frequent essential. So what, what were some of the initial, you know, shocks to you on how this all played out?

Francesca Schuler: Well, a couple things I think none of really ever probably thought about the importance of being involved in policy in this industry, we just didn’t. I think we all focused on serving our members, building our teams, opening new doors, and it took this crisis to realize that businesses like the restaurant business and others have these amazing to trade associations and they have a footprint nationally and at the state level. So I think the shock to me was one, wow, this really matters too. We’re at zero. We have literally no connections anywhere. Yeah. And how hard it is to get heard in an industry. That’s just trying to make people healthy. I mean, the biggest disconnect between public health and California who would say exercise matters and just go run outside with no consideration of the fact that so many communities it’s either too hot in California, it’s too smoky or people don’t have feel safe and need a place to go to work out that’s safe. And so I was just surprised at how much it mattered, how far we have to go still to get her and how there’s such a disconnect with policy makers and then what’s really happening.

Pete Moore: Yeah. You know, the one thing when people started to say, oh, IHA should do this. SHA should do that. It’s like, well, we haven’t provided them the capital or the resources to actually do this. We basically have asked them to do be a data provider, you know, you know, get a membership base have suppliers and, and, and clients and customers, you know, connect. And that’s kind of the extent of what ERSA was. So I, I was always kind of defending SA to the point of, well, if they had a 10 million budget and then we hit the pandemic and nothing happened, you know, that’s a different conversation. So, you know, as we, as you kind of rolled forward in California, what were some of the steps that were successful? So other people in other states could say, Hey, this is a, a path yeah. To, to getting a voice heard.

Francesca Schuler: Yeah. So I think you know, California is probably the toughest state to have been operating in. So we definitely had some highs and lows and still do. I think the things that we have done that have worked well in California is one is we are very inclusive. So on our advisory board, we have regional players, we have national players, we have single club owners and boutique owners. So we’re really representing all parts of fitness. And we’ve been very clear about this is anyone and everyone who’s involved in fitness. So I think that’s been really good. We have not, not focused just on club owners. We’ve been really active with studios, CrossFit boxes, et cetera. So I think that’s been a big success for us. I think the second has been to stay apolitical. It’s been an emotional time. There is a lot of anger out there on all sides, and we have done everything we can to be neutral.

Francesca Schuler: You have to work with whatever administration you have. So whatever your political views, you have to put those aside when you’re advocating for all these people who lost their jobs. So that’s worked well for us. We, you know, we had to, we had a really good really relationship. Initially when we first launched it, then went completely radio silent due to some public health changes in the California administration. We ended up having to use a legal action. We sued to try and get attention that worked would not recommend that it’s really expensive, but it was the only avenue we had. The good news is the net result of the at is we now have direct line to the administration. We have their commitment to establish a state council on physical fitness and mental wellbeing. So I love that we’re now marrying mental and physical together, cuz that’s what exercise helps with.

Francesca Schuler: And I think we’re doing a great CA grassroots campaign now really educating everybody of faces of California fitness. So we have all these little videos that we’re shooting to having people tell their story. So if anyone who’s listening, want to have their story told we’d love to have a conversation with you and shoot it. And we’ve been sending that to all of our politicians, a at the state level, at the national level to just meet us, let us know we are real people with real jobs and who have lost a lot. We need want to voice at the table. Yeah.

Pete Moore: So during the pandemic, I listened to a podcast series of it was called gangster capitalism and it was about the national rifle association. And the average donation to the NRA is $40. And they’ve got like a 96 million, you know, political action committee and they, they make things that make things happen or not happen right in their, in their favor. Do you see going forward a group of bricks and mortar fitness equipment companies, you know, Peloton eye FITT Nautilus, and, and kind of turn the fitness Alliance into like, Hey, we’re going to do everything we can and kind of broaden our mission statement, maybe even at the Ursula level or whatever the name changes in the California fitness Alliance to say, okay, here’s who else wants the same things we want? How do you think about that as you kind of, you’ve already expanded the bricks and mortar spectrum, but like does, is there another layer to this that brings in more advocates and more money?