Posted at 17:36h in HALO Talks by David Ganulin 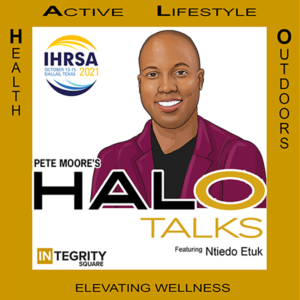 Pete Moore: This is Pete Moore wanted to officially announce the release of Time To Win Again: 52 Takeaways From Team Sports To Ensure Your Business Success. I wrote this book over the last year. I think you’re gonna love it. Good to great meets wears Waldo pick ’em up for your team. Time to win in 2022. Happy to come to your club, your studio, your company, and talk about ways we can optimize business and win going forward. Go halo. This is Pete Moore, halo talks NYC on location, face to face with a B2 B2C community engagement leader, and visionary known him for several years. Made great progress. NT. Welcome finally to the show.

Pete Moore: I’ve been doing all right, man. I I feel like we’re on the, the, the road to recovery, but got a little bit of a handing gret where you gotta kind of pick your paths and it’s gonna be a slow role, but that’s right. We we’ll we’ll get back. So you’ve been doing some great things for a lot of studios getting them online. Yeah. You know, making them sophisticated. So they’re not doing, you know, Facebook live and Instagram live and zooming and freezing. So give us your personal background, why you, you know, your position to do what you did and yeah. Yeah. You know, take advantage of the opportunity.

Ntiedo Etuk: Sure. So originally originally from Nigeria and The Bahamas grew up in Nigeria apparently didn’t have any friends cuz I was coding six new six programming languages at the age of 11. Wow. Yeah. Yeah. And was building really rooted men, video games. They were terrible, but I still call ’em video games. I say credit, I came to things

Pete Moore: Were moving on the screen.

Ntiedo Etuk: Yeah. That something was,

Ntiedo Etuk: Was happen. That’s right. Then I came to the states did a little bit of that boarding school thing and then studied engineering, electrical engineering Cornell. Wow. Worked a couple of years and then went back to business school of Columbia. Did a, a stint with a management consulting firm called McKinzie. Heard of them, heard of them. Yeah. And then then I was pulled into what I call city groups, DARPA program. It’s like their, their R and D group to come up with billion dollar ideas. So did that for a bit. And then I was pulled out to work with the president to city groups the chief of stats, city groups, president, and I was supposed to, I think go on into a glorious future and finance, but really I was like, you know, I started my first company already and that company does educational video games. So imagine games that allowed kids in LA to play kids in New York while they were learning math and literacy multiple people. And at the same time it was that sort of thing. What was that called dimension? You still call dimension you. I like to, yeah. So

Pete Moore: Given how much time I see my nephew Fortnite and his to focus only on that going towards math, I think it’d be a lot

Ntiedo Etuk: Sharper, you know, I’m I’m and I’m determined to bring that kind of, you know, chocolate with the broccoli to fitness as well like that. Yeah. So so anyway, I, I ran that for a number of years, raised a fair amount of money for it. And then came into the fitness space and I came into the fitness space because I was injured. I had plantar fascitis which is that pain between the front and back of the feet, you know from running too much, et cetera. And went into the, went into the pee and they were like, you have CIAR faciitis and I was like, what’s that

Ntiedo Etuk: Sounds terrible. You know? And I was like, okay, I

Pete Moore: Do comes up with all these like illnesses

Ntiedo Etuk: Have no idea, you know, I’m like, all right. So I, so I, they said do yoga, do Pilates. I was like, great. Went and did some Pilates cleaned it up and, and was able to stand more than 15 minutes. I was like, this is amazing. This is what my next, this is gonna be, let me help the world do this. And the experience was really, when I walked into the group fitness studio, my instructor private instructor told me, come to my group fitness class. There were these three women in the class and they said, they’re talking to each other, put my mat down. They were talking to each other and they’re like, Hey, are we going to brunch after Pilates? And I was like, I like brunch. So I was like, Hey ladies, you know where we

Pete Moore: Brunch? It was, it was great.

Ntiedo Etuk: You know, I was like, are, are we gonna do this? And I was not invited to brunch. But, but you know, so I say, Zuck,

Pete Moore: Dave, get this guy in omelet.

Ntiedo Etuk: Seriously, man, come on. Small violin. Right. So I so I was like, wow it’s a community. People know each other. They like each other. They, they create friends. I like to say Zucks started Facebook cuz he didn’t have any friends. I started this cause I wasn’t invited to brunch three months later, still didn’t know, 50, 60% of the people in the community. Right. And I was like, this is weird. We have common interests. We’re in the same sort of closed room. Why are people not connecting this? You,

Pete Moore: You don’t think had anything to do with the foot injury that people talked about and was tweeting about, Hey, stay away from this guy. You’re gonna get this plant of fish. Exactly. Right. Like what that Steve to be saying, staying on his own Pate’s machine. That’s right. That’s right. He’s got socks on. So something fight this kid. A brunch. Yeah.

Ntiedo Etuk: Yeah. So I was so I was just like, this is amazing from a retention perspective, we believe that if you come to class, you’re more likely to keep coming back. If you’re more connected to other people, more connected to the clients, the instructor that’s motivating you, the front desk person. It’s like good to see you again.

Pete Moore: I would go a soul cycle like four or five days a week and yeah. Yeah. It felt like a third place at home. That’s

Ntiedo Etuk: Right. Like cheers a place where everyone knows your name. Totally. So retention, play acquisition, play, bring it all together. Community engagement and use your, leverage, your people to help you do the business. So that, that’s what we did. We pushed that out to a bunch of studios. We had 18 at the beginning of 2018. We’re now in over a thousand in 18 countries, we grew five

Pete Moore: Times. You always running it under fit grid or was there any other names associated

Ntiedo Etuk: With it started as your

Ntiedo Etuk: Okay. Yeah. And initially it started as a marketplace where instructors and trainers could find, you know, clients

Pete Moore: When you and I last

Ntiedo Etuk: Connected that’s when we last connected. That’s right. That’s right. And and at that point, you know, one of the things that I wanted to do was I wanted to be, it was ahead of its time. Like it would’ve been perfect for COVID. Right. Sure, sure. I wanted it to be a place where if you walked into New York, you could find a yoga instructor for you, regardless, whether in a gym, a studio or on their own. And the gyms in the studios at the time were like, well, that looks kind of competitive with us. So I turned it around and said, let me go to the studios first and actually bring the instructors in that way. And so that was what we started to do. So with the community engagement system, we have three pieces of software, one that’s for the instructors that allows the instructors to understand who’s coming into class and send follow up messages.

Ntiedo Etuk: And that increases retention over 15% and increases the amount of revenue that comes in. Then there’s another piece for the for the staff person. And there’s another piece for the clients. So those three components make up the community engagement software and you can do it Alec carte, but it’s really increased increas the ability for people to come back and think about it like an automatic community builder in the background. If someone could just turn on and have your community automatically connected, establish a picture based community, get your people automatically bringing new people in automatically coming back and spending more money. And then it tells you personally, this is when you wanna send a personal message because this person you’re about to lose them or it’s time to upgrade. So that’s what fit grid does. It’s been really successful.

Pete Moore: So talk about, obviously, you know, since the age of 11 doing video games and now doing community engagement software, how do, how does somebody get onboarded? How does that interface with some of the other software systems or mind body, or, you know, how do the pictures come in? And

Ntiedo Etuk: Yeah, so we so we attach the booking billing systems. So mind body is is our big, I guess, partner. Okay. in that sense, and then we have a sales force that we actually go out and we call the different studios and say, Hey, here’s what we have. Are you interested? To the extent that they’re interested, then we latch in, we go through the mind, body API. And that’s when we start seeing the information about which classes people are signed up for which instructors they have, et cetera, etc. Gotcha. Yeah.

Pete Moore: Good stuff. So, so how did you build a team since, you know, you’re an entrepreneur and you probably have ideas of here’s my strengths, which there are many, I got a couple of blind spots or things that, you know, I need other people to do. Yeah. So how did you think about, cause I think a lot of, in one of the chapters in the book, it’s like, okay, how you gonna build your squat? So did you think about that giving you had a couple businesses before war, the first couple hires?

Ntiedo Etuk: Yeah. You know the first time my first business I built from the top down. Right. You know, and that tends to be pretty heavy. You end up with executives with a lot of experience. You need a lot of people, you know, under them in order to get things done because they’re not going back to the days when they were doing the work. In this case, we actually started from the ground up. So started with actually who’s now our CTO and our now our head of product and we’re just the three of us in an office building the stuff out. And then we went to sales and then marketing client services. Right. but what we’re really focused on, who are the people who can do the work and I can handle the strategy. Gotcha. You know, in the short term and the medium term. And now we’re at the place where we’re really making that transition and say, okay, we’re looking for the folks who have done this like two, three times, you know, before in order to be some of the executives that we bring into the company.