Posted at 15:48h in HALO Talks by David Ganulin 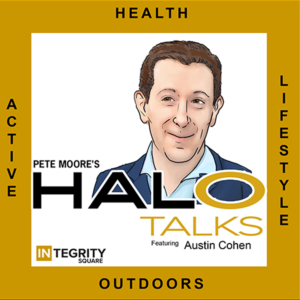 Pete Moore: This is Pete Moore wanted to officially announce the release of Time To Win Again: 52 Takeaways From Team Sports To Ensure Your Business Success. I wrote this book over the last year. I think you’re going to love it. Good to great meets wears Waldo pick ’em up for your team. Time to win in 2022. Happy to come to your club, your studio, your company, and talk about ways we can optimize business and win going forward. Go halo. This is Pete Moore on HALO Talks NYC, I have the pleasure bringing back Austin Cohen  For his second HALO Talks podcast.

Pete Moore: Off in the early stages of the business, we were getting a sense of what he was trying to do, and he’s come back to tell us how it’s gone and how the platform has been optimized during COVID

Pete Moore: Thanks for having me back. It feels like ages ago we were under the stairs in what was it? The Roger hotel?

Austin Cohen: That is correct. Yeah, we were on location at the time. Pre COVID if everyone remembers pre COVID and I have my flexed shirt that has lasted through COVID and it’s kept on my tennis court. So I appreciate the attire and I’m looking for a little more apparel as our quid pro quo post podcast.

Austin Cohen: We’ll have to get that set up

Austin Cohen: Anyway. So why don’t you give us a little background on, you know, March 20, 20, flex it in its original state and kind of what’s have since then,

Austin Cohen: But it’s been a very, very fast last year and a half. As I think it has for many others here in the industry you know, just looking towards the future with new year’s the new year new you around the corner. I think that we can all pretty much say whether your studio and operator on the equipment side. It’s great to see where the industry is now, given the events out the last year and a half, but March, 2020, we were flying at the end of the first week in March. We were, we were on pace to just absolutely destroy everything that we’d done in February. And obviously by the third week, end of the third week in March, 2020, the unimaginable happen, which was every gym across the country closing with, with no real end in sight for that. And I, I think at that point in time, we were in a very, very similar position to the other operators, the operators that we worked with.

Austin Cohen: So prior to COVID you, our was predicated on the doors of gyms being open. We were a Legent tool for the clubs. We worked with the clubs to drive non-member in the facilities on a pay per use basis. It was the most seamless way it was walk in. We like to say scan show and go. And it was just that easy to pay by the minute for your time in the gym. So the clubs hit and we did two things that I think we’re pretty different than what most others did. The first was we didn’t know what furloughs and Noah else and the second was we made a decision to not quickly. And I, I think in doing those two things was the best decision we made because it helped set us up to be in a position to do what we ended up doing.

Austin Cohen: So we took about mid-March to mid-April to really dig in, observe, learn, see what was happening. And we formed a thesis and that thesis was that virtual fitness, not new, but was accelerating. And it was accelerating across three primary categories, livestream, prerecorded, and hardware. And the type of content that we saw coming from hardware was livestream and prerecorded. So we felt that there were really two types of virtual fitness that were being, that was being provided to consumers again, live stream and prerecorded. And we felt that at a time where the gyms were closed, trainers were furloughed laid off looking for work, that there was an opportunity to really dig in on personal training to create an experience that was live in two late. And we quickly accelerated the roll out of our virtual product. We were not planning to release a digital product as soon as we did.

Austin Cohen: And, and, and we quickly turned a V1. We tested some fit out. It was really well received. And then we, we jumped in with two feet, we went wrong and what we call virtual personal training. And it’s been an absolute game changer for us. We fast forward now here to December, 2021, we’re running the original business, which was flexible gym access with virtual personal training. And it’s been great. And I feel fortunate that over the last year and a half, we’ve been able to help a lot of people, but we’ve also been able to capitalize on a difficult situation and, and bring this new platform that I believe fits in, in real white space, in the industry to people not just across the country, but across the world.

Austin Cohen: So when you started to relaunch this new platform, obviously you had to go back to your current client base and basically say, Hey, you know, us is this, and now we’re doing this. So did you, was that welcomed at an easy transition or was that and I like the fact that you took time to think, cuz we kind of, we said that a lot on, on, on these podcasts, like don’t just jump into something like take the time to think how, how did that go and, and, and how do you feel about, you know, the receptivity you got?

Austin Cohen: Yeah, it just sounds like the, the time to think piece, last time I was on the cast, we, we talked a bit about entrepreneurship. Some of the stuff around wheels up and my experience there with the founding group. Yeah. But you know, I’m a big believer in customer discovery in you know, making informed decisions fast decisions. We run a quick pace by informed decisions and not jumping into something without the right proof of concept. So you know, the first place that we did look was our existing customer base which was a smart decision by us that it, it helped us to start to prove out what we were doing. Get quick feedback. So all that was really valuable. I would also say that anytime you’re introducing something new, there’s an education process, right? You could be the biggest company in the space.

Austin Cohen: And if you’re going to introduce something new, there’s still communication that has to come along with whatever you’re introducing. So I would say it was advantageous to have a base that was not able to a product that they were used to engaging with that was ready to receive something new because they enjoyed us and were able to get quick feedback. But of course there was still education that we had to do and the products are a bit different. And so we had to use that education process as opportunity. But you know, I, so I would say yes, on both fronts there, the education piece is something that we still believe is really important. You know, two years ago, virtual personal training was not a category. It wasn’t a thing. We believe we’re leading where the, the, the category where the, the number one in the space here, but we’re teaching people every day that it’s just as easy to work out live. And one-on-one with someone, even if you’re not physically in the, the same space. And it’s going to give you an experience that motivates you more and holds you better holds you accountable than just pressing plan a video. And so that education process that we went through early on with our existing base is still something that we’re going through every day here, as we look to expand and scale virtual personal training.