Posted at 17:30h in HALO Talks by David Ganulin 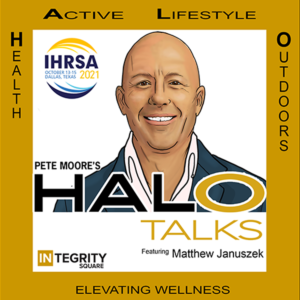 Pete Moore: This is Pete Moore wanted to officially announce the release of Time To Win Again: 52 Takeaways From Team Sports To Ensure Your Business Success. I wrote this book over the last year. I think you’re going to love it. Good to great meets wears Waldo pick ’em up for your team. Time to win in 2022. Happy to come to your club, your studio, your company, and talk about ways we can optimize business and win going forward. Go halo. This is Pete Moore on halo talks NY on location with my new good friend, Matt escape fitness via Santa Barbara together. And now we are, co-hosting a halo talks through a hostile takeover by escapes podcast, Matthew, welcome to co-host by she.

Matthew Januszek: Hey, thank you very much for inviting me in this kind of beautiful entry wear. It’s not quite as beautiful as the place in Santa Barbara that we do. Is it, would you agree? Yeah,

Pete Moore: I mean, a lot of people asked me if that was like a backdrop and I said, no, man, that was real. And we had cushions over the speaker Topeka system. So you guys were you guys were very crafty. Yeah, maybe we could put some like some the butterflies in the background or something. Yeah, I think we

Matthew Januszek: Need some Palm trees or something. Yeah,

Pete Moore: I didn’t think about the background, cause we’re just a on audio, you know, they said you know, radio killed the, the, but it video killed the radio store. Thank you. Thank you. Thanks for joining in the podcast without asking. So Matt, you and I had a really good conversation. I really appreciate you guys bringing us on. And I think we gave people a pretty good crash course and you know, what was what was happening and what’s going on the financial side and how people look at it. You know, you spend a lot of your time talking to hundreds of health club operators and entrepreneurs, you know, so maybe just start for the five people that don’t know who you are, you know, give your background and let’s talk about some of the things you’ve seen that are being successful and that obviously makes you successful because you’re partnered up with those relationships,

Matthew Januszek: Right? So yeah, I’m a co-founder of escape fitness or of functional training equipment company. So essentially design some of the most beautiful gyms around the world. We provide them with support on, on actual design itself, equipment, education, and also a lot of advice and helping people to understand, I guess, you know, navigate the business side of, of things already because you know, you can stick a bunch of equipment in a room how do you make money from that? How do you get results? And that’s really what we we’d like to do as a, as an organization.

Pete Moore: So when you started in the industry, you know, the original way to sell equipment was to come to a trade show, selling a piece of hardware, drop, ship it to a location when it opened and now, you know, being a value added supplier and actually giving someone advice is kind of like the new normal, you know, so how you’re kind of like on the, on the front end of that, did you, did that happen deliberately or is it like people started to rely on you and you need to come up with like, Hey, I’m actually going to tell you I’m going to solve some business problems for you at the same time.

Matthew Januszek: I think as a, as an organization, I, we, to answer that question, no, we we’ve, we didn’t do it from a reactive perspective. I, I was always an, an avid learner all the way through in the company. I was, I was terrible at school. Didn’t really like school and, and learn a lot. But when I left, I realized I do actually enjoy learning. So I I’d done a lot of conferences and coaching and, and, and that kind of thing. And so as a business, I always felt like, you know, how can we continue to move forward and move our company forward, innovate and, and help the people that we are working with. So, yeah, we started out at, at trade shows. And to give you an example, when we did our first trade show, I didn’t have any money as such. I think we had a couple,

Matthew Januszek: Too. So, so we had a, a kind of booth and I think it was probably like six feet by two feet. It was very small and, and there was all these big, it was one of those kind like shell schemes. And I thought, I, okay, I need to stand out. So I had a friend of mine who used to do the, the, the clothes for a group called the prodigy. She was there in a place called Essex in England and she made these wacky costumes. And I said, why don’t you make me one of those funky costumes and then make me like a, kind of a, a really cool sign to go on the back of it. So I had I, so I had this freaky outfit and this weird sign and, and people just came by because it was really weird. And, and then it became a little bit of a habit where at the trade shows, I, I, we, all of our team wore seventies costumes one year and we, we, we run seventies prior and all that sort of stuff.

Matthew Januszek: And the reason I’m telling you that is as I suppose, you know, I think you always have to try and do things differently, not just for the, the sake of it, but to kind of stand out. And sure. The easy thing for companies to do is just blow loads of money. And, and think that’s a way to solve problems and chatting to a, a guy in there. Who’s a, who’s an investor. I think if you start your business doing it organically with your own money, you have to learn how to manage. Not a lot. You have to be creative and innovative. Whereas I suppose if you can, although I think I’d like a chunk of money to be able to take your business to another level. If you had that too soon, sometimes you don’t really know what to do with it. And I, I, I think it’s a, you know, it’s probably not necessarily as helpful as what it could be.