Posted at 17:22h in HALO Talks by David Ganulin 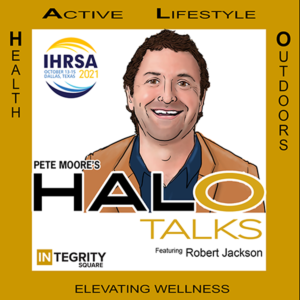 Pete Moore: This is Pete Moore wanted to officially announce the release of Time To Win Again: 52 Takeaways From Team Sports To Ensure Your Business Success. I wrote this book over the last year. I think you’re going to love it. Good to great meets wears Waldo pick ’em up for your team. Time to win in 2022. Happy to come to your club, your studio, your company, and talk about ways we can optimize business and win going forward. Go halo. This is Pete Moore on halo talks. N Y I have returning for his second podcast straight from the San Francisco area used to be an entrepreneur. Now he is part of a larger entity because he built something that’s pretty awesome. So we got Robert Jackson fitness, BI slash ABC fitness. Good to see you back.

Robert Jackson: Good to be back.

Pete Moore: Awesome. So when we first did our podcast, we were talking about the need for reporting and data, and you were kind of just in, you know, the early stages of getting people onboarded. So tell us what happened. Since the last time we spoke, how that kind of ramped up and what the you know, what the reason was to do a deal with ABC and how that, that deal’s playing out. Right.

Robert Jackson: Right. Well, last time we spoke was 2019, right? Yep. Before the, you know, the, the pandemic and everything that happened there. So I think that March, 2020 was the first time I had a break where all of our CFOs were either on freeze on hold or had been let go. Right. Right. So I got a month where it was really quiet for the first time in probably 12 years for me, 15 years. And it, it really made me think about, you know, burning the candle at both ends first.

Pete Moore: And you were doing like two. Yeah. And you were run two companies, like in parallel the same with form of

Robert Jackson: gym as well. That’s right. And, you know, former Jim took up a very small amount of my time cuz I made some great hires there. Yeah. Yeah. But your dad, no. Well, yeah, Ralph garage is, is another guy that we, we brought on Don. Remember? So yeah. It’s, it’s a burning the candle at both ends from customers calling all the time, you know, B to B SAS business took me by complete surprise. Like the, the club business. We’re trying to fill up the club as much as we can. Right. It’s never question of, you know, I’ve got too many customers, I’ve got too much growth. It’s a matter of let’s fill up as much as we possibly can. Let’s get that marketing completely D and, and there,

Robert Jackson: Not supposed to be controllable. No. And I mean, it’s, it’s a, the huge difference is, you know, for club owners out there, imagine that one of your members is to comp compose this 25% of your business. Right. Right, right. And that member, if he complains, are you really going to just kick him out? You know? So it changes the ballgame significantly. Interesting. And I B2B software as a service. It’s, it’s a different, different ballgame. Took me average by surprise. I made sure, you know, two years in the first two years were definitely ramping massive growth. COVID hit, got a little bit slow. And then all of a sudden, everybody wants to know about their data. Right. Because cause they have time think actually, right. Well, yeah. I mean a break. So we got some of that break. Okay. Let’s work on our reporting. And fortunately we had good clients that were Mo mostly private equity backed that could afford to keep it up and running.

Robert Jackson: Yep. But at the same time, a lot of the other enterprise companies that hadn’t had a solution before people like blink fitness, people like planet fitness is some of their franchisees there said it was a good time for them to implement a solution like this. Right. And data changed drastically in a month or two, the questions that people wanted to ask changed, interest, strength, everything changed, you know, instead of knowing how many joints we had, they want to know how many joints came back post COVID. How many people are exercising post COVID, who are the people that are not on exercising? Can we target that specific demographic? You know? So we did a lot of work across a lot of different companies and trying to figure out who these people are that haven’t come back to the gym that they can target and what, the reasons that they’re not coming back forward.

Robert Jackson: So it changed the game drastically freezes, you know, people on hold, you know, the result of that is that business really ramped up significantly. We got some really good clients let’s say in, you know, that leading up to the acquisition. And then we got approached by a few different software vendors and ultimately ABC’s vision of what they’re accomplishing and wanted to bring to the industry. It was what sold me. Yeah. You know, I’m a kind of guy that what I want to do is bring lasting change and make an impact. You know, we all want to make an impact. I’m at the point in my life where I want to build something cool. Impact, you

Pete Moore: Build fitness BI based on your own like personal frustrations at the time. Right. So, so it’s kind of like any really strong software company is kind of like take what’s in your brain, turning into code and saying like, okay, I solve my own problem. I know every else has the same problem. Let me go

Robert Jackson: After it. That’s right. Yeah. So I launched fitness BI at SA and I, I built it with a hundred thousand bucks. Right. Yeah. 50,000 went into marketing. I was your conference

Robert Jackson: And so I think I had my dad in the background, like populating Excel reports to say, okay, Hey look, the data just changed. And it’s refreshed. I think, think

Pete Moore: My dad could do that. I’m not sure what my mom would ready for the, for the Excel. She’s still trying to figure out how to use an ATM machine. I love her to death. But’s old school. Right. Right. So, so, you know, fast forward here, you get approached by a couple groups you decide to, to enter into a deal. There weren’t

Robert Jackson: That many took five months. You know, it wasn’t a, it wasn’t as quick as I thought it would be. I mean, the due diligence that Tom Bravo does is no joke. I mean, I’ve always heard that from my other buddies in, in the equity space that, you know, if you want going through the due diligence process will make your company way better. Cuz you get to understand what actual private companies are looking. Yeah.

Pete Moore: That’s what a lot of people say when we’re, when we’re going through the front. End of putting a book together on, on selling a business and you start asking questions. I remember Brad and Ty loved that guy to death. Yeah. He had 17 clubs and I had my head analyst now as a principal working on the deal and he would send back Brad, you know, these reports of like of slicing the data, looking at the KPIs. And Brad’s like said to me one day, he’s like, man, I understand this business so much better than I did before you guys got involved. Cause I’m looking at it differently. Maybe I don’t want to sell it. Right. Right. I’m like, let’s stick to the path. Let’s get this deal done. You got it done. If you, if

Robert Jackson: I knew now what I, before this acquisition, how, what, what people would value out of my business. Yeah. It’s really interesting. It would drive valuation. I mean hands down. So like having a guy like you, having, having, having halo, I mean, that’s, that’s the, if I could say like one huge benefit from engaging early yeah. Is understanding what these guys are going to value your software business on. Yeah. And how can I drive or revenue to those areas and focus if that is your ultimate end goal. Cause if your ultimate end goal is to like be as profitable as possible, that’s great. Run a freaking great business, do it the way you want to do it. If your ultimate goal is to exit, you got to consider these things. Cuz ultimately we’re all looking for a bigger exit. And if you got to know what the values are and, and play to your strengths, you

Pete Moore: Know? Yeah. I mean, especially when you’re dealing with companies that are for our audience here, you know, you’re dealing with companies that are valued on a multiple of revenue and that SAS monthly is, is basically like the lifeblood of the valuation. Yeah. And you know, you could say, when you start the company, you could say, Hey, I’m going to do this as a SAS model and that’s easy. But there are certain companies that try to create a SAS model, but it’s just not a SAS business. Right. And you know, they try and shoehorn it in and then when somebody like an ABC or DACO somebody else looks at it, they’re like, Hey guys, like there’s not really any recurring revenue here. It’s like a transaction business and you

Robert Jackson: Got to that’s. Right. And, and I mean also who are the customers, right? Like as a SAS business, you could load up a bunch of customers, a lot of small customers. Yeah. Enterprise customer, as mid-size for us, we had to come to have that a real come to Jesus and say, what is it that we want to focus on? That’s going to bring the highest value to our organization for the long term picture, but also for the post, you know, the, the pre-acquisition picture and customers that we had made the biggest difference in valuation. Right? Because it was just a one off clubs. Even if the revenue was four or five times higher, we still wouldn’t have that value. It’s the idea that we had big name brands, cuz those big name brands bring a lot of revenue without a lot of hassle. And also they brought a lot of value intrinsically to the other organizations that wanted to buy us. Sure. So you know, it, it was, we were unique in that aspect.