Posted at 15:19h in HALO Talks by David Ganulin 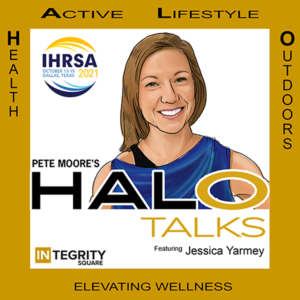 Pete Moore: This is Pete Moore wanted to officially announce the release of time to win again. 52 takeaways from team sports to ensure your business success. I wrote this book over the last year. I think you’re going to love it. Good to great meets wears Waldo, pick a ’em up for your team. Time to win in 2022. Happy to come to your club, your studio, your company, and talk about ways we can optimize business and win going forward. Go halo. This is Pete Moore on halo NYC. I have the pleasure of having a seasoned executive and entrepreneur and influencer in our industry, Jessica Yami by way of Dallas, Texas, native, Texas, as of today, because we’re doing it live and in person. And I’m excited to talk to

Pete Moore: Awesome. Before you give your bio, let’s talk about soccer for a second. Yes. Okay. So I was a goalie for, until I was 40 and then I officially retired cause I hurt myself. And I’m okay now, but thanks for asking. <Laugh> so you were a D one soccer player. Yes, I was. So give us like how, like being on a team sport at that level, kind of put you in position to, to yeah. Run organizations and be bold.

Jessica Yarmey: Yeah, I have, I’m a lifelong athlete. So I started playing soccer when I was six and played all the way through high school. Multisport in high school. And then when I went to college, I focused on soccer and I was unanimously voted my team captain my senior year. I was the best player on the team by far congratulations. But I think, you know, the power of team. Yep. And I think that’s really where I found my calling to, to build teams and identify like strengths in people mm-hmm <affirmative> and empower them to hone in on their strengths and maybe let go of some of the weaknesses. I think a lot of times we spend a lot of time trying to correct our weaknesses when it’s like, okay, to

Pete Moore: ‘Em around. Yeah. I used to, I used to come home and I played goalkeeper Uhhuh and I started playing goalkeeper at age eight because I was, I got chubby cuz I used to go to ice cream man. And my dad had this change bin and I was allowed to take all the change out mm-hmm <affirmative> so I used to hide all the those bubble gum big league chews, like blueberry and raspberry under my bed. And I wake up in the morning with like gum over my pajamas. So oh my gosh. Not good to, to ingest that much. Sugar is like a nine year old. So I’m like, Hey, oh so I could use my hands and I’m I don’t have to run like I’ll do that. Yeah. And I got good. But

Pete Moore: A thankless role. It is a thankless role, but it’s kind of like, I just got to make sure we don’t lose you guys. Make sure we win. Yeah. And then my mom, I come home crying. Sometimes my mom’s like, Hey you’re you got through the other 10 people. You can get through the 11th. I’m like, yeah, but I’m allowed to use my hand. So not really a great argument, but thank you for your sympathy mom, but

Jessica Yarmey: It’s a resilience role. Oh two, you, you build up that, that mental toughness of I’m going to have a loss and I’m going to need to immediately come back from that loss. I need to stand back up and keep playing and dig in. And I think that’s a great skill to build in high school in college. Cuz then you go into the business world and you have a loss and you’re like, you know what? I know how to do with us.

Pete Moore: The interesting thing is, and then we’ll get to, to, to what we were supposed to talk about, which I’m not there yet. The interesting thing is if you go to undergrad or you go to business school, there’s not a class that’s called how to fail or like when to know, to pull the plug like it’s so, and I went to Harvard business school. So they don’t teach you when to say stop because they teach you that, Hey, you’re going to be the next. So and so, and they forget to tell you if this isn’t working out, you know, it’s not personal. Like maybe you picked the wrong time or it’s, you know, there’s a pandemic or there’s a financial crisis. So I think people need to like embrace the losses and maybe it’s a sign to go and do something else. And really people go through something that says, oh, this failed. And then, you know, I lost my weight completely. Like there’s always a new door that opens up, but it’s usually a bigger door. Yeah. So yeah. So let’s go to your bio and then let’s talk about, you know, kick house and, and where you’re headed, but let’s go, go backwards.

Jessica Yarmey: Yeah. So I was a division one athlete and like have always been passionate about athletics. I was working in franchising starting in 2008. But in restaurant franchising, mm-hmm <affirmative> and had a couple years of experience in different, in different brands, burger king, Gordon beers, old Chicago, and kind of hit a crossroads in my career where I could either go work for crystal burger, which is a small

Pete Moore: Burger joint. Oh, trust me. I went to Emory <laugh> we used to go to crystal. Crystal’s like for those who don’t know, it’s kind of like white castle, but like a little bit yep. Smaller patties. And it’s a li it’s you go there only late at night. It’s

Pete Moore: Did you ever seek it out beforehand?

Jessica Yarmey: It’s interesting. I didn’t. And I think it was maybe because it was Dallas, Texas based, but it got fed to me in LinkedIn two or three times, even before I acted on it. Some algorithm found you it’s like the algorithm

Pete Moore: Knew, you said this woman was the yeah. Captain of her team. She must want to work at Gold’s gym.

Jessica Yarmey: Right. And I, I didn’t act on it the first two, three times I saw it. And that it’s amazing that the algorithm knew myself better than I know myself. Right.

Pete Moore: So thank you to LinkedIn for setting her up into her dream. Exactly. Job in the dream profession. I would hate it if you, you worked at crystal. Cause we would never probably have met. I don’t think I’m in the market for a crystal burger. Yeah. That’s true. In any capacity. Yeah. Ownership or

Jessica Yarmey: Edible. So the other extreme, I don’t eat meat. And so it was really this moment really tough for you. It was just really a divide kind of moment. And I would encourage anybody who’s who’s listening. Like the magic is following your, and if you have the opportunity to follow multiple passions at the same time, more power to you, like do that thing. You know, even if it doesn’t immediately have a dollar payout overlap as many passions as you can and go for it. I love that.

Pete Moore: I love that. So Gold’s gym. Then you went and, and worked with club Pilates when it was kind of in there serious growth trajectory.