Posted at 09:01h in HALO Talks by David Ganulin 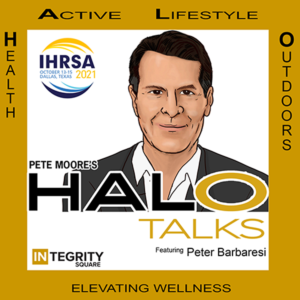 Pete Moore: This is Pete Moore on HALO Talks NYC on location, Dallas, Texas, my new best friend, Peter Barbara se Dana point, California. Hey buddy, I haven’t spoken to you in like a couple hours

Peter Barbaresi: Or at least last night, at least good to be on the Pete Moore show.

Peter Barbaresi: <Laugh> all right. So I am a from the beginning a I’m an athlete, you know, we’ll start with that, cut that segues into life definition. So college athlete back in the day, way back in the day hockey lacrosse and then fortune 100 company background with P and G Nestle Perina taco bell Mattel. So usually sales marketing, and then general leadership stuff with, as I started to get into smaller companies. So kind of fast forward and probably most relevant to this. And what I’m doing now is I’ve been operating companies in the health wellness, fitness space or halo as we like to refer to it as.

Peter Barbaresi: So, so I ran velocity sports performance back in the early two thousands came in turnaround CEO old it’s a stack mm-hmm <affirmative>. And so that was a good, that was a good deal for, for all parties then I stayed with that for a bit. And then I went into the yoga business. So I have a friend that’s owns a, a studio or I should say a chain. So I got into that yoga and ran that business for a while. And then we ended up selling after about two years to exponential fitness mm-hmm <affirmative>. So since then I’ve been working with a variety of different brands, usually as a, an advisor, a board member, a CEO chairman in an investor. So kind of, I play all those different, you know, positions, if you will. Mm-Hmm <affirmative>, you know, in a, a bunch of different companies that I’m involved in, usually you know, I get involved on a fractional basis and but I get involved. I’m not just a you know, a wallflower that’s, you know, watching things. I like to be very actively involved cut I think I, at this point terms of the, that that space I’m, I’ve gotten to know quite well and also on the multi-unit business. So many of these things are exactly that. Yeah.

Pete Moore: Great. So, you know, I use this term all the time experiences, what you get when you don’t get what you want. So talk about, you know, when you get involved in a company how you can kind of diagnose pretty quick, you know, Hey, I’ve seen this movie before, not sure which movie it was, but like, this is how my brain is wired now to kind of diagnose what’s going on, where you need help, where you’re strong and how I’m going to basically like rebuild your team or your business, or just, Hey, let me just be a trampoline for you and provide you what you need as a, as a mentoring tool. So like talk, talk about how your, how your process works and you know, when you think through it and you get involved and decide if you want to do something or

Peter Barbaresi: Not. So basically, I mean, everything is different. That’s, you know, I, I guess that kind of goes without saying, but every, every company is at slightly different stages of maturity or immaturity. But the key thing is, I mean, it is about the people I usually am. I’ve got a, I’ve got a good read on character, talent, capacity limitation, whatever that might be. And I have run into multiple situations where, you know, that chemistry of the key players is critical. Mm-Hmm <affirmative> to the success or the failure of, you know, where they are going. And I mean I only get involved and am involved with, with really good people. I mean, I genuinely like the different people in groups that I work with, but it’s interesting that if you just make some tweaks and when the, the level I come in in, which is usually at the top after observation, just tweaking in terms of whatever that organization’s structure might be or the, the reporting structure of those people, or just being there to mentor, coach listen, mm-hmm <affirmative> to, to different people. It makes a difference. Yeah. And so it really makes the difference in their behavior, how the organization just might feel more relieved and confident in what they’re pursuing and how they’re going about it. So, I mean, I know I’m talking about a lot of subject subjective stuff here, but I can just say that it matters a ton in terms of cultural impact and which translates to performance.

Pete Moore: Gotcha. So when you get involved in a company, you’re either technically, you know, a board member or chairman of the board, maybe an advisor to the business, how do you, and, and this is probably for, for the segment of the audience here, that is either they’re thinking about going on somebody’s board, you know, what, what role do you try to play and how do you kind of eloquently insert yourself without being like a change agent or, you know, a bull in a China shop?

Peter Barbaresi: Right? So the key is not to be threatening mm-hmm <affirmative> and I’m, you know, it’s not my style. I mean, my personality, if anybody he knows me is that I’m, you know, I’m a good listener. You know, I’m not an I, I show up and I really I’m here to do good to, to help people to coach. And so earning the trust of the board of the ownership of the executive team, and that’s not just the, you know, I don’t, I don’t sequester myself just to that, you know, each executive level because, you know, you got the troops and the troops do the work and the troops need to know who you are. And so I’m good at talking to the troops as well. Mm-Hmm <affirmative> and I like it. So having that trust throughout the organization is absolutely critical to what I do mean. I don’t care what my title is. I am, I could care less, but you do have to have some kind of title this, then they honor, well, who is this guy? And what’s he really doing? So ultimately how long is he going to be here for, yeah, you got to get, I have to self assign myself, or I have to find something that, you know, works with whatever it is, but so whatever it is it is, and, and, and we just kind of go from there. Gotcha.

Pete Moore: So let’s talk about a couple of the companies and we’re familiar with and, you know, pretty well. You know, let’s talk about UpperHand software out of Indianapolis from, by Kevin, you know, talk about how that, how you got involved there and how you’re helping guide that business, which is, you know, on, you know, running Liz a tiger by the tail or this point with the, with the growth.

Peter Barbaresi: Right. So upper hand is, is a, is an affiliate partner with another company that I, I work with. And so that’s kind of with athletic Republic, so we can talk about them at some point as well. Mm-Hmm <affirmative>, but it’s basically upper hand small growing at inflection point type of software CRM company. And I was asked by the private equity group that owns them to come on board and work with Kevin mm-hmm <affirmative> is a super good guy, very smart, very charismatic CEO, but young. And he hasn’t run a lot of companies, quite frankly, but very capable. So I am on board with them now and I’ve been with them for several months, mostly you know, working for the board, working for the private equity group, but working closely on a day basis with Kevin and less so, but somewhat.