Posted at 13:43h in HALO Talks by David Ganulin 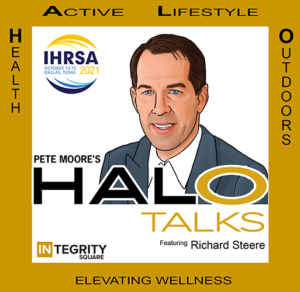 Pete Moore: The is Pete Moore on halo talks NYC on location, Dallas, Texas with a good and old friend of mine. Rich steer new Heights capital welcome. Finally to a halo talks. Thank you, Pete. It’s

Richard Steere: Good to be here. Good to be in Dallas at IHRSA again.

Pete Moore: So you were one of the original investors in the health club industry, as I like to say. So you were one of first movers into what we now call the H V L P 2.0. Now you’ve got some orange theories and, and you’ve done some other interesting things in and around the halo sector. So why don’t you just give your background first on the banking side and then turn it into a private equity guy and then we’ll talk about the industry and the nuances of it.

Richard Steere: Yeah, so I, I started in the industry as a M and A advisor helping privately held companies, raise capital or sell. And I was an industry generalist and did that for 10 years and went out to search for a business to buy and, and invest in. And I had a group of investors who were former clients, so I had helped cash out their business. So they had capital to invest and pretty quickly into that search and process. I was introduced to a group of entrepreneurs that happened to be the fitness edge and the edge fitness clubs, and went up went up to Connecticut and met them and, you know, was really impressed by what they had built and their passion and talent for the industry. And so I was not a fitness expert or had experience in the industry before, but they absolutely had elements of a good business and good partners.

Richard Steere: And so we were able to you know, strike a, strike, a deal. We invested, we bought control of the company and the original founders who were brothers, Jim and Vincent Sanon stayed on. And we went through a period of time where that was in 2008 where we had to kind of restructure the company and come up with what is today, the edge fitness club, the H V P model mm-hmm <affirmative>. And that really started to take off and grow and began kind of the early elements of, of scaling that company. And you know, we, we were partners for seven years and new Heights sold that business and, and moved on and has stayed involved in the fitness industry. We’ve invested in orange theory, fitness at the franchisee level. We are investors in fresh meal plan, which is a freshly prepared meal service that have, has been focused on, on gyms in the fitness sector and active lifestyle. We are co investors in ABC fitness which is a, is kind of the predominant building company to gyms throughout the country. And we are, are now kind of early supporters and investors in, in restore hyper wellness again at the

Pete Moore: Okay franchising. We got franchisee or franchisor franchisee. Okay. We’ll talk about that privately to working on something on that front. So let, let’s talk for a minute about, you know, rewind the clock you go and you meet with the San own brothers. They’ve obviously got a nice mouse trap that they’re generating strong unit economics. What’s your, you know, what, what, what did you provide to them that they couldn’t do on their own as, as entrepreneurs?

Richard Steere: You know, the business was also at that time, less mature, less sophisticated, less data driven. And that was actually a kind of a good time, right. Fit for me coming in with financial skills, analytical skills and, and the ability to kind of crunch numbers and help them look at the business quantitatively mm-hmm <affirmative>. So they bootstrap that business. They started in the eighties as gold gyms, franchisees and so they’re true gym guys. And so they were at an inflection point where they still wanted to move on with the industry, still wanted to lead in the industry, and they needed a partner who brought the skills that I had that could help their business and really take it from a collection of clubs and brands into an enterprise and help them manage that enterprise, not only financially, but from an organizational standpoint, with, with people and disciplines and overall kind of just brand development. Yeah. So

Pete Moore: In, in a lot of businesses, you see the entrepreneur, I, and it takes a business can grow to a certain level. At some point, they look at their personal balance sheet and they say, right, I’m on the hook for 10 leases. I’m on the hook for these 10 loans. You know, the business is generating EBITDA and, and things are going well, and there’s money in the checking account. However, you know, there there’s an overhang and I probably can’t really grow, you know, off of my, my own personal balance sheet anymore. So talk about, you know, your relationships with debt funds, you know, bringing in this institutional capital and how conversations with landlords and, and debt financing sources change when somebody like you gets involved.

Richard Steere: Absolutely. That that took place with, with fitness edge at the time, those guys were personal, guaranteed on leases. They were, you know, in, in the midst of taking on planet fitness as a major challenge in the industry and coming up with the edge fitness clubs, as a response to that, where they could still lead and grow. And, you know, they had to think back and reflect on their own partnership, their own personal balance sheets and how much they would be willing to risk to continue to grow and take on bigger spaces, bigger leases. And so when we invested, yes, we brought in equity capital, but we also brought in a lending partner and we were able to present the business at, at a holding company level. So where before maybe landlords would’ve looked at them as partners in different gyms, they were now able to kind of see a holding company and release in certain instances, those personal guarantees and absolutely going forward that afforded the company. And then personally, as kind of the leading executive of the businesses no longer to have to extend themselves personally on leases or for that matter, any more than kind of their prorata ownership to invest in grow in, in new locations. So I think that was a really significant milestone for them where we were able together kind of accomplish that goal.

Pete Moore: So, you know, and we’ve talked about this on, on several podcasts before, but you know, when private equity, he comes into a business, there’s no one from the private equity firm that’s signed in a personal guarantee. There’s no debt, that’s recourse debt. And what I’ve used as an analogy is, you know, you and I are playing with a chess or a checkers board, but I’m playing chess. Or in this case, you’re playing chess. And me as an entrepreneur, I’m, I’m kind of playing checkers on this team landscape because you could grow much faster than I can because I, I’m not looking at what my personal liability is where you’re setting up and saying, Hey, it’s a portfolio company. And this portfolio company kind of has to stand on its own.

Richard Steere: That’s correct. And then also, you know, from an equity standpoint, you know, we’re bringing a group of investors, right. That are either our investors are limited partners to the transactions. So that helps diversify the risk as well. And it also, you know, helps or at least it, it presents to landlords that there is a point with which you can’t, you cannot longer kind of jump over the wall and ask people to personally sign. So the business has to stand by itself and the balance sheet has stand by itself. Mm-Hmm <affirmative>, but it certainly helps when you’ve got a strong equity partner that’s got experience in capital. Yeah.

Pete Moore:So how do you, when you take a look at whether it’s the edge, or you look at other deals, a lot of entrepreneurs like to run their own business and they, they, that’s why they started the business originally. So the question is, you know, when you come in and say, Hey, look, I think this business is great. I think this entrepreneur is great, but I don’t think they’re ready to have a partner. You know, how, how do you think through that? Or like, what’s your, how is like your, your, your, your sense of like, Hey, I get what they want to do, but I’m probably not the right person, or I’m not the right firm to do that, cuz I don’t think they understand what the relationship is going to be going forward. How do you think about that?