Posted at 12:55h in HALO Talks by David Ganulin 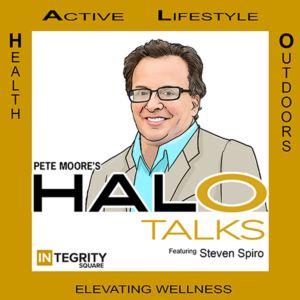 Pete Moore: This is Pete Moore on HALO Talks NYC.I have my friend from parts unknown, Steve Spiro. We’re going to talk all about halo therapy for people who don’t know what that is. We’ll just take a salt that we’re putting into your lungs and we’ll make you breathe better. So Mr. Spear up, good to see you again and welcome to the talk.

Steve Spiro: It’s always a pleasure. We haven’t really connected in the last few years, but you’ve been on my mind is break me. We’re rendezvous in here.

Pete Moore: Yeah. Well, anytime I see your name came up on my on my text message. I get excited to talk to you even just texts with you. So I’m looking forward to this more than you are. So to start off here, tell us how you got into the you know, what we used to be called the wellness industry. Now it’s called the halo sector. You know, what got you into this and how you became a specialist on the salts at

Steve Spiro: Great. So now I’m basically a serial entrepreneur. I’ve been doing entrepreneurial business for the last 25 years. I was on the founding team of audible.com, which we sold to Amazon kind of changed the world of entertainment and education while you’re kind of driving or running. And then I’ve done about five or six other startups. And as I got older, I just turned 65 yesterday and I got my Medicare card. Exciting know I started to run into a whole bunch of people, my age that were having, you know, breathing problems, you know, respiratory issues. You know, this was about six, seven years ago and I was looking for a kind of natural wellness as opposed to taking all kinds of drugs. And I of just stumbled onto this halo therapy industry. And there was a couple of people doing it and I parked it up with this woman. And it’s been great ever since the business is actually exploding now.

Pete Moore: So, you know, you spent a lot of time internationally whether that’s on business travel or, or leisure travel. So, you know, heals therapy as a amenity or a modality is still kind of new to the U S but you know, give us a little bit of insight into what’s going on outside of the country and why it’s kind of poised to take off finally.

Steve Spiro: No, it’s a really fascinating it’s funny. I spent a lot of time living in, I lived in Japan for three years, China for a year Hong Kong for a year, a lot of time in Thailand. So I’ve spent a lot of time in Asia and where natural wellness remedies are just really popular. So I’ve always been very interested in natural remedies. The technology or the industry for halo therapy really started in Poland and Russia, probably 150 years ago when they discovered that the people working in the salt mines there, weren’t having the same respiratory skin conditions as the rest of the population. So they brought it into the hospitals and they set up these facilities to help people with no respiratory issues and classic skin conditions. But then it kind of morphed over here maybe about 10 or 15 years ago. And it’s been slowly growing the last three, four years.

Steve Spiro: And the last couple of years, it’s absolutely exploded a lot having to do with COVID frankly, because more and more people are now concerned about their respiratory hygiene immunity. But it’s interesting you’re even though it started in Russia, it’s not that popular in Europe, it’s like decent and in places where you think it would be really big, like China, where the air pollution is big, they have really tough regulations and a lot of places in Asia. So we’ve seen really strong growth in the U S Australia and Canada, but not really strong growth the rest of the world yet.

Pete Moore: And then just in layman’s terms, you know, the way I describe it as kind of like the halo therapy device is really kind of a, a grinder, almost like a cured machine breaks down the salt into nano particles, puts it in the air, you breathe it in, it’s really kind of drying out your lungs. Is there anything that to add to that or to further simplify

Steve Spiro: That is in a nutshell what it is. So the halo generator, like you said, it takes, it’s really important to it’s pure pharmaceutical solid. It’s like 99.6% salt that they use in the hospitals. It’s not Himalayan salt, which is pretty. And people look at salt lamps and it’s relaxing, but it’s no therapeutic benefit. So you’re right. It crushes it up. And then the salt dust, if you always solve dry salt therapy goes into either a salt room or a booth or a bed or a cabin, but now we have it with a sauna. So it’s the salt that does all the work and salt is just naturally anti-microbial, it’s super absorbent. So it sucks up the mucus and crap in your lungs. And you cough it out such a great way of getting rid of toxins and getting rid of inflammation in your lungs or on your skin.