Posted at 12:00h in HALO Talks by David Ganulin 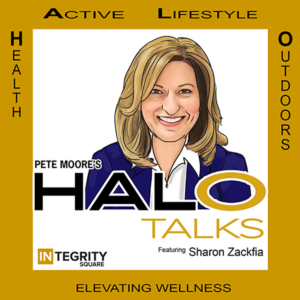 Pete Moore: This is your host, Pete Moore. And I am pleased and humbled to announce the launch of my one and only book titled time to win again, 50 takeaways from playing and watching team sports to guarantee your business success. Those of you who know me personally, and then when of was listens to halo talks or any length of time, know that I am an avid sports fan and a big believer in the value of team sports. What I’ve seen over the past 25 years, helping businesses grow raising capital, being an entrepreneur myself in coaching and mentoring executives in the sector. It’s the lessons learned on the field perfectly apply to business entrepreneurs, executives, managers, you name it. Every company that’s a strong company has got a good team. So quick read. There’s also illustrations in there from our good friend market cruelty free cartoons. If you go to integrity, sq.com, enter your email address, and we will send you information on the book and the entrepreneur wars survival kit as well. Be great. Take names go halo.

Pete Moore: This is Pete Moore on halo talks out of the pleasure of having Sharon equity research. William Blair out of Chicago. We were able to be on a speaker series with Rick Caro, uh, earlier this year and wanted to further educate our halo talks audience on what the real public markets look at, uh, when it comes to companies and have Sharon give us some of her views on what the future will look like. So Sharon, welcome to our halo talks.

Pete Moore: So from a standpoint of just educating people on, you know, what you do every day when you wake up in the morning uh business-related uh, and tell us, you know, how you think about what the future looks like and how to price companies, um, you know, if you could just give us a little primer. Yeah,

Sharon Zackfia: Well, that’s a big question. So I mean, as, as with, I think everybody’s a profession, no two days are the same, right. But in a nutshell, we’re trying to analyze business models, um, ascertain some sort of fundamental value for that business model. And then, you know, if it’s publicly traded that, uh, equates to a buy or sell on a stock, um, and you know, one of the interesting dynamics, I think that is often, um, overlooked in the equity markets from those that are outside of our ecosystem is just why some companies get, you know, an X valuation, whereas others get a Y and you know, growth is really important in terms of the way that investors look at valuations. And that’s why you’ll see some companies get, you know, valued on a multiple sales and you’ll have other companies that are trading at an EBITDA multiple or an EPS multiple, right. Because with the multiple of sales, you’re looking at eventual EBITDA, hopefully, right. That’s, what’s counted in there. Um, when you’re looking at EBITDA, typically I’m a more mature company, but the growth of the growth dynamic tends to be, you know, where the higher evaluations come in and the more disruptive companies.

Pete Moore: Yeah. So you take a look at some of these companies that have gone public in, you know, whether it’s a spec transaction or it’s, um, uh, electric vehicle, autonomous truck that as a, as a driver on the 4 0 5 scares the out of me that there might be somebody who in a, in an 18 Wheeler that doesn’t have a driver in it. Um, it’s controlled by computers. And those are valued at, you know, 25 times, you know, 20, 25 revenue, you know, who, who starts with the financial model, um, do they send it to you? And then you guys kind of sensitize it properly or, or, um, you know, you, are you so deep in a market that, you know, you kind of come up with your own projections, you know, based off of the company’s business model.

Sharon Zackfia: Yeah. Well, I, well, personally speaking, I’m always coming up with my own projections, right? I mean, I don’t know how it would earn, earn my bread every day if I didn’t come up with my own projections, because ultimately, you know, for the companies that are already public, most of those companies give guidance. And so they’ll say we’re expecting a billion dollars in revenue or $2 in EPS. And that moment, when that is said, the assumption is that that in a purely efficient market is embedded in the valuation. So what you’re really looking for then is where’s the surprise, um, you know, better or worse than what the management is, is guiding to. So I think any analysts worth their salt is doing their own modeling and trying to figure out really where their risks lie and where the opportunities are

Pete Moore: As companies go public. And then, you know, they’re obviously answering to, uh, people like you to say, Hey, this is what we did. And, you know, here’s, here’s why this didn’t happen. Or, you know, we had an upside surprise, which some companies, I think, live by trying to provide upside surprises or, you know, sandbag their guidance, you know, do you feel as if companies are appropriately managing quarterly earnings and also long-term growth, but when you’re a public company, do you kind of have to maybe make some more trade-offs that you don’t have to do as a private business?

Sharon Zackfia: I certainly think has a public company there’s more of a balance between investing for the future and harvesting profitability, right. So, you know, the, the go growth at any cost is, is usually best done private, and then start to see some improvement on the profitability metrics, you know, once a company goes public. Um, but I, I don’t know beyond that, that there’s, um, there’s anything I would, I would really add.

Pete Moore: Okay. Yeah. So, so some companies, you know, like in, in the healthcare industry, we always hear of, uh, you know, monthly close outs, that’s kind of, you know, what will most health club operators talk about? Um, on, on private companies held by private equity firms. They’re usually talking about annual growth. Um, you know, and, and then the public markets it’s either, you know, they’ve got a, uh, a ticker, uh, that’s going off in the lobby showing you what the stock price is, which I don’t know if that’s good or bad from an employee morale, I guess, you know, pretend that the, you know, the led screen doesn’t work when the stocks going down, I guess, and keep it up.

Sharon Zackfia: I do think ultimately, I mean, as, as a management team, you need to keep your eye on the long-term, right. I mean, we, and if financial markets are going to look at the quarters, because we always say every quarter, you know, four quarters make up a year, four years make up, you know, four years. Um, but, uh, but you, you, if you’re sacrificing your long-term goals to reach a quarter, I mean, that’s not a win for anybody, right? So ultimately management should be playing the long game, um, whether they’re private or public. Um, but I think in the public markets, like if you had, let’s just say pizza fitness clubs had a great new initiative that was going to take your margins down, you know, 10 percentage points, probably best to do that over a multi-year period, as opposed to just announcing to the public markets, say, guess what, you know, our margins are going down 10 percentage points next year. I mean, that would be, that would be something in the private markets, maybe just rip off the Band-Aid and you do it, but unless there’s a strategic kind of competitive necessity for you to do it publicly, it behooves you to spread that out and try to create more predictability for your investor base.

Pete Moore: Um, so, so in a nutshell, we’re basically managing the long-term growth and the profitability of the company, but, but really having our, our equity stakeholders, that, that we’ve decided that we’re going to be a publicly traded company, that we basically have to manage their expertise, expectations, and what they think about what we’re doing and yourself versus the, you know, the, the luxury of having a private company, but not the liquidity of, um, of being able to do acquisitions with, with currency or raise money much easier, uh, than, than in a private deal. So just wanted to kind of cover those, those trade-offs, um, you know, as, as change, changing gears, if you take a look at, um, the home equipment business, and, you know, it’s been around for 35, 40 years at this point, um, you know, whether it’s a total gym commercial that, you know, changes slightly every five to 10 years, or it’s just the same people that they had on there with Christie Brinkley and, um, Chuck Norris.

Pete Moore: And then you see all these new competitors come along, um, in a lot of industries that I’ve been a part of, you know, you’ve got, you know, somebody saying, Hey, I’m going to be the next Uber. I’m going to be the next Peloton. You know, typically you’re not actually. Um, so how do you kind of calibrate market, uh, euphoria with, you know, your history of saying, you know, look, the first to the market actually gets a lot of the spoils, um, and it’s going to be really hard to either replicate or displace, or how do you kind of look at it with a, you know, with a white piece of paper all the time.