Posted at 17:37h in HALO Talks by David Ganulin 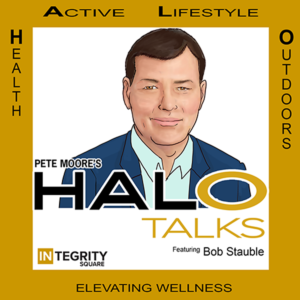 Pete Moore: This is Pete Moore on halo talks NYC. I had the pleasure of having a long-term friend of mine and in the health club industry, one of my first friends in the sector from the early two thousands coming in from Plymouth, mass. He needs no introduction, but we’ll give him one pop star. We’ll get to see

Bob Stauble: You. Hello, how are you?

Pete Moore: Awesome. So, uh, you’ve been in the, uh, in the cross section of, uh, of health clubs and, and healthcare and medical fitness for a long time. So you want to give our listeners the couple that don’t know you, uh, your background, and then we’re going to talk about the next evolution of tele-health and preventative medicine.

Bob Stauble: Sure. I think I started up health tracks as a co-founder around 1980, and we were traditional Ursa clubs for, for at least 10, 15 years. Um, but we, but I, I always had a strong science background and we did a lot of work with, uh, corporate sales where we could get big companies to pay attention that our fitness programs were a little more science-based than a typical gym or Gold’s gym or whatever. And, uh, in fact, one of our early vice presidents for corporate sales was Dave Pickering who went on to create the international fitness club network as part of Ursa. So that was really a spinoff of health tracks. And, um, then a 20 year veteran of health tracks, mark Korea joined him about 15 years ago and they morphed into of a wellness company, a corporate wellness, and they sold to Virgin pulse not too long ago.

Bob Stauble: So that kind of that corporate science background, um, led us to look beyond health clubs. And we got into the corporate healthcare world in the early nineties, and we bought a company called Workfit and we would put athletic trainers into Boeing, general motors, general electric, and they were really musculoskeletal health coaches. So a lot of these big companies have their wellness providers doing cardio-metabolic wellness. I like to call it, but they were not very good at musculoskeletal wellness. And we would embed a full-time athletic trainer, you know, in the work site. And we did several, uh, healthcare related, uh, including physical therapy centers that we had ownership. And so I was kind of at health tracks, a serial entrepreneur, starting division, selling some off, keeping others. And, you know, for the last 20 years in health tracks, I forged a lot of relationships with large hospital systems to build wellness centers, which were medical office buildings with a gym inside, you know, integrated.

Bob Stauble: So I worked with big systems like Johns Hopkins, where we would be an equity partner in the real estate and the fitness center. And, and that, that is, you know, even more exposure to, um, healthcare. So, um, th we ha we always had a health tracks, a small division for health coaching women’s division called health assessed, and that Marc Ray was running that and he went off and joined Dave. And I didn’t build that because I saw that as a sinking ship industry, it grew to $8 billion, the corporate wellness industry selling to employers, whether they’re for-profit or not-for-profit, and, uh, it’s stuck, it’s shrinking, it’s a red ocean world of, you know, low margins. And the CFOs are waking up that there is no return on investment investment that having a wellness program for your employees is the right thing to do, but it should be voluntary where a lot of companies were throwing $2,000 incentives and forcing employees to do wellness that they didn’t even want to do.

Bob Stauble: And there was no claims cost ROI. So, um, probably about 15 years ago, when, uh, before Obamacare, there was the emergence in Medicare of, um, you have your ACO accountable care organizations. Those are really networks of providers that go at risk with the government to thumb small extent, but they’re at risk. So, um, when ACS first emerged a lot of the corporate, uh, they said we’re in the population health management business, you know, so it’s, it’s a B2B to sell into an ACO and then help them manage population health. So employers are populations. So what all the wellness companies did about 15 years ago, including my division, we kind of rebranded ourselves. We’re not corporate wellness anymore. We’re population health management companies that help with employer populations instead of Medicare populations. And the problem was that population health is about people who have health problems.

Bob Stauble: So the, this term early intervention would be like pre-diabetes or chronic, low back pain, um, early stage arthritis, you know, um, before they get really expensive, but you have a health problem where wellness just tries to keep you out of ever having a health problem. And there’s almost no market for that. There’s no ROI. People are not that motivated when they don’t have a problem, but if you move down stream a little bit, and what I learned in healthcare as they call it upstream and downstream care way downstream is, is, you know, an intensive care unit in the hospital and upstream is primary care, further up is fitness and wellness. So somewhere between wellness and prevention and primary care is this early intervention world is mostly, self-care some physician intervention sometimes, et cetera. So, um, that that’s what the wellness industry should have done, but they didn’t, they just said their population health and they didn’t do anything for that next, you know, bend in the river.